It was the biggest drop since March 2011. It was also the first time that the administration received a “moderate” net satisfaction rating. 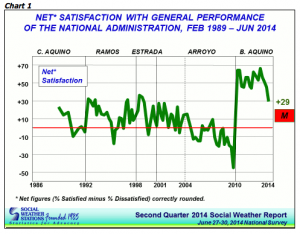 Of the issues surveyed, the administration rated higher or “good” for protecting the environment, providing enough supply of electricity, defending the country’s territorial rights, promoting the welfare of overseas workers, foreign relations and helping the poor.

On the other hand, people were “neutral” (-9) on whether the Aquino administration was able to ensure that no family will be hungry. 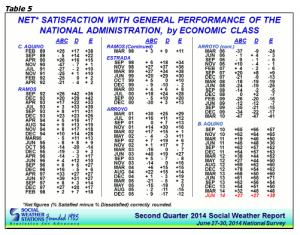 More people were also dissatisfied with how it addressed inflation (-18) and ensure that oil films don’t take advantage of oil prices (-9).

A majority remain dissatisfied with how the Maguindanao massacre case was being resolved, garnering the administration a “bad” satisfaction rating of -44.

Aquino rating 8 points down vs graft