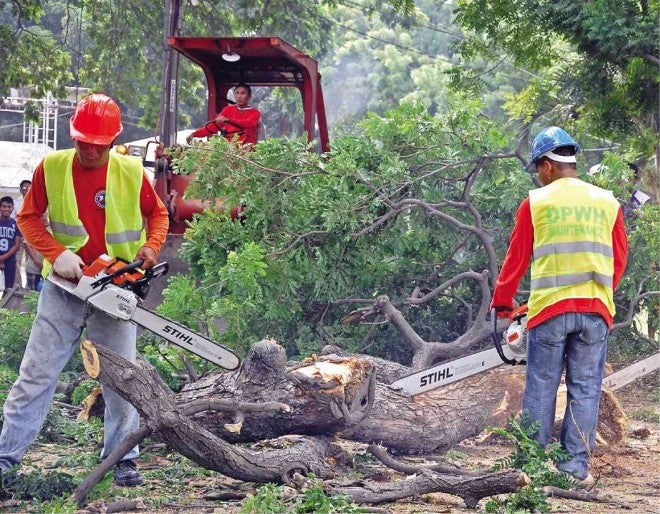 DPWH workers enforce a death sentence for this and other trees in Barangay Tinaan, Naga, in Cebu province. CHRISTIAN MANINGO/CEBU DAILY NEWS

CEBU CITY, Philippines—The government agency tasked with protecting the environment had handed the death sentence on 88 trees—many of these century-old—in one town and two cities in southern Cebu because these were “sick and dying.”

Incidentally, these are the same trees that would be affected by the 15.7-kilometer road-widening project that covers the cities of Naga and Carcar and San Fernando town, and funded mostly by pork barrel funds of two former congressmen.

According to the Department of Environment and Natural Resources (DENR) in Central Visayas, the trees should be cut because, based on the regional DENR office’s assessment, the trees were rotting.

As of Thursday, four century-old acacia trees in Barangay (village) Tinaan, Naga, had been cut. Three others were expected to suffer the same fate within the week.

In San Fernando, 77 trees had been handed the death sentence because these were all sick and dying. Of the number, 32 were century-old acacia trees. 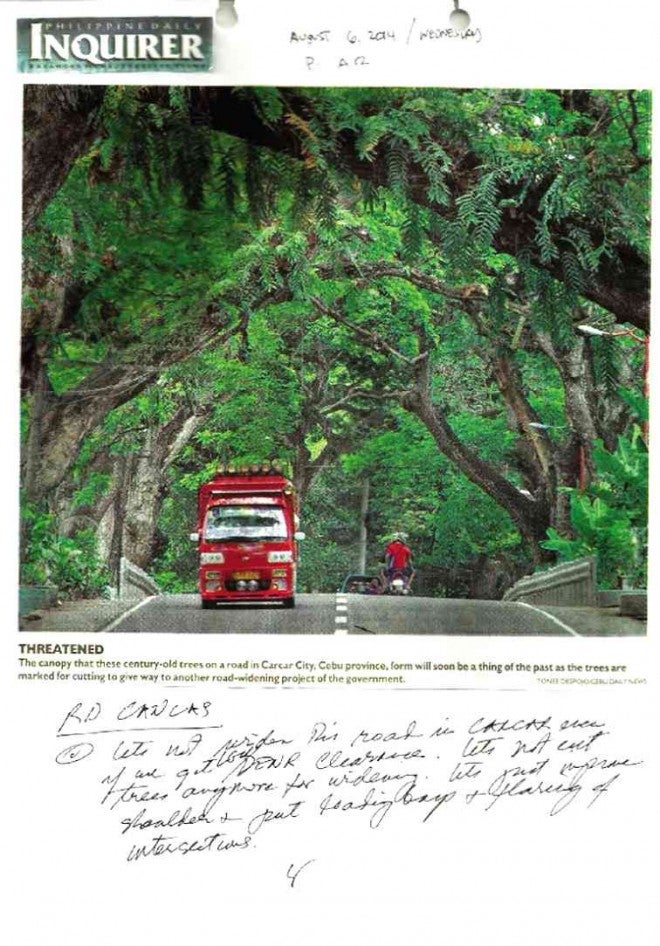 A CLIPPING of a photograph that appeared on this section on Aug. 6 bears the note of Public Works Secretary Rogelio Singson. CONTRIBUTED PHOTO

These trees are part of a line of century-old trees that form a canopy in Barangay Perrelos in Carcar and have been declared as heritage trees by the local government unit.

Four trees in Carcar, however, may have found a reprieve after Public Works Secretary Rogelio Singson issued a handwritten memo to Ador Canlas, Department of Public Works and Highways (DPWH)-Central Visayas director.

Singson wrote a marginal note on the photocopy of a photo showing a canopy of trees along the national highway of Carcar, which came out on the Across the Nation section of the Inquirer on Aug. 6.

The note addressed to Canlas read: “Let’s not widen this road in Carcar even if we get LGU/DENR clearance. Let’s not cut trees anymore for widening. Let’s just improve shoulder and put loading bays and flaring of intersections.”

Canlas, in a text message to the Inquirer, said he would heed Singson’s order.

Six DPWH workers had been sent to execute the tree-cutting order. The trees are massive that it would take at least two days to cut one tree.

Eddie Llamedo, DENR Central Visayas information officer, said his office has not received any advice from DPWH that it would stop cutting down the trees.

He said that since it was the DENR that issued the special cutting permit, it, too, is the agency that could stop it.

Llamedo said his office stands by the assessment that at least 88 trees in Naga, San Fernando and Carcar had to be cut since these were rotting and are in danger of toppling down.

“Our competent foresters said those trees are already defective,” he said.

“If we have to choose whether to preserve those trees or preserve human life, we choose the latter,” he said.

The 88 trees turned out to be among 155 that would be affected by the P1.2-billion road-widening project funded by pork credited to former congressmen Eduardo Gullas and Tomas Osmeña.

Read Next
Lawyer claims vehicles from Binay overpriced
EDITORS' PICK
Biden vows to stand with Asia on freedom, hits at China on Taiwan
Legarda emphasizes role of ICC/IPs in nation building this IP month
What’s at stake for every fighter at ONE: NextGen
NCR’s COVID-9 alert level may be downgraded from 3 to 2 soon — DOH
Climate Change Commission and Nestlé PH to discover sustainability-focused solutions
FDA reviewing COVID-19 vaccines’ EUA for booster shots
MOST READ
Drivers now required to take driver’s education upon license renewal – LTO
Gordon to Duterte: You? Teaching me courtesy?
Yang, Lao, firms linked to Pharmally didn’t file ITRs for several years — Drilon
Marcos Jr’s ‘special diploma’ from Oxford: You can have it, too
Don't miss out on the latest news and information.