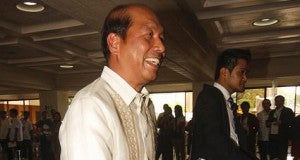 During the Development Budget Coordinating Committee hearing at the House of Representatives, Abad in his presentation said these are the only lump sum — or essentially, non-itemized — portion of the special purpose funds (SPF).

The government had said the budget would be cleared from graft-tainted lump sum funds.

Now without the PDAF and DAP, lump sum funds under SPF now amount to P48.1 billion or down from P51.3 billion in the 2014 budget, Abad said.

Abad backtracked from his statement when he presented the budget to Congress for the first time.

“The total amount that pertains to the Special Purpose Funds that I mentioned is P501.670 billion, or about 29 percent of the new General Appropriations Act. The rest are department and agency budgets,” Abad had said.

Under the lump sum SPF are calamity funds, contingent funds, rehabilitation and reconstruction program, as well as allocations to local government units such as special shares, Abad’s presentation showed.

Abad said these are not disaggregated because because calamities and crisis that may be funded with these cannot be anticipated.

“By nature of the funds, they have to be lump sum,” Abad said.

Meanwhile, at least P330.5 billion of the SPF is not lump sum but “disaggregated” to budgetary support to government corporations, allocations to LGUs, e-government fund, international commitments fund, miscellaneous personnel benefits fund, and pension and gratuity fund, according to the presentation.

Also, at least P816 billion were under automatic appropriations such as the Internal Revenue Allotment,  basically the local government unit’s annual share from the proceeds of the national internal revenue taxes, which has long been seen as the pork barrel fund equivalent for local officials.

Abad said a bulk of the SPFs are disaggregated and not lump sum.

The committee aims to assess the overall economic targets, expenditure levels, revenue projection and the financing plan in relation to the national budget.
RELATED STORIES