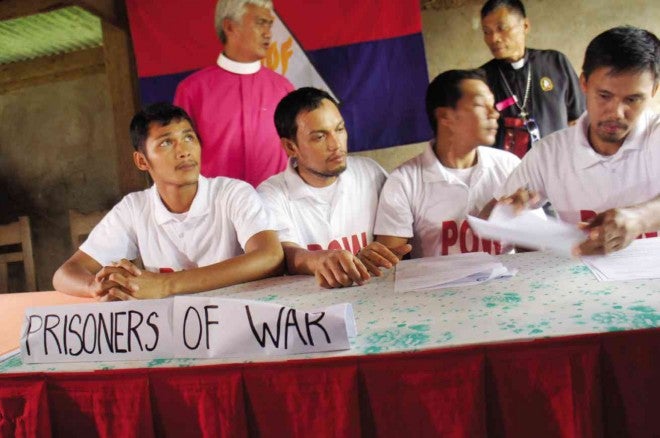 THE FOUR captive policemen in rebel territory shortly before they were released in Agusan del Norte. FRANKLIN CALIGUID/INQUIRER MINDANAO

SURIGAO CITY—While he did score “pogi” points for the release of four policemen captured by communist guerrillas here, Interior Secretary Mar Roxas may have lost a local ally in the process.

Surigao del Norte Gov. Sol Matugas, provincial chair of Roxas’ Liberal Party, said she was “hurt and frustrated” by the way Roxas handled the police officers’ July 29 release, which occurred in the neighboring Agusan del Norte province and supervised by local officials there.

“What I regretted is the action of the national (government) to take over (the negotiations), as if we don’t know what we are doing,” Matugas said in a press conference here.

“There’s so much to learn on the ground that the national (government) does not know,” the governor said.

Matugas headed the provincial crisis team that initially negotiated with guerrillas for the freedom of the police officers, who were captured when New People’s Army rebels raided Alegria town on July 10.

The local negotiations, however, broke down, prompting the guerrillas to withdraw from the talks and indefinitely cancel the release of their “prisoners of war.” The NPA said Matugas was warmongering after she rejected their six-day ceasefire proposal.

Roxas got involved when he agreed to a five-day ceasefire, just one day short of the timeframe demanded by the rebels within which to transport and release the policemen but substantially longer than the 72-hour truce that the local crisis team had proposed.

Matugas said she felt deceived because Roxas and his team had indicated that the turnover of the policemen would be in Surigao del Norte, particularly Alegria, where the policemen were taken.

She said she was taken aback when, at the last minute, Roxas informed her that the release would be in Kitcharao town in Agusan del Norte.

“I told him (Roxas) I can’t come to Kitcharao because it is outside of my province,” she said.

Instead, the governor said she waited in Alegria where she expected Roxas to formally turn over the policemen.

When it was apparent that no turnover would happen in Surigao del Norte, as Roxas and his entourage were rushing to catch the afternoon flight to Manila, Matugas said she left Alegria “hurt, frustrated … and feeling sorry for myself.”

She characterized the incident as “disrespect” for her and the provincial government.

Roxas and other national government officials waited for the policemen at the town center of Kitcharao while former mayor Hernani Braganza, now a consultant of Roxas, fetched the policemen.

Asked whether this would affect her family’s affiliation with the LP, the governor said she did not mind being treated that way by LP, but did mind the treatment she got from “the person leading the party,” alluding to Roxas.

Will she still support Roxas as LP standard bearer in 2016? “Only time will tell,” said Matugas.

The governor’s husband, Francisco, is congressman of one of the province’s two legislative districts, while her brother in law, Ernesto, is on his second term as mayor in this city.

Before they switched parties in 2010, the Matugases are once allied with former president Gloria Macapagal-Arroyo’s Lakas-Kampi. Danilo V. Adorador III, Inquirer Mindanao