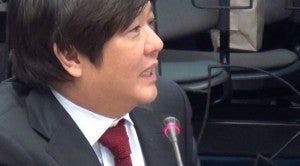 “Well, maybe he’s an admirer of the President and he would like the President to continue. But our Constitution    does not allow it,” Marcos told reporters,    reacting to Local Government Secretary Mar Roxas’ reported statements that Aquino’s term should be extended.

Under the Constitution, the president has a six-year term and barred from seeking reelection.

“Maybe that’s just a wishful thinking. That’s what he would like,” added the senator, whose late father Ferdinand Marcos Sr. ruled the Philippines with an iron fist for 20 years.

But Marcos said he would not be surprised if the administration would attempt to change the Constitution to allow Aquino to extend his stay in the Palace.
He pointed out though that no less than Malacañang has rejected the idea of amending the charter.

“I won’t be surprised if someone would attempt, but he himself says  no opening of the Charter. The Palace position on that issue is very clear unless they change their mind,” Marcos said.

Marcos believes Roxas was simply expressing his personal opinion “because he feels that the President is doing such a good job that he’d just like (Aquino) to continue.”

Asked if he shared Roxas’ opinion about the President’s term, Marcos said Aquino has a lot of things to do and that “there have been some opportunities that were lost.”

“I don’t know    what we can do in two years,” Marcos said, referring to the remaining years left before the President steps down from his office.