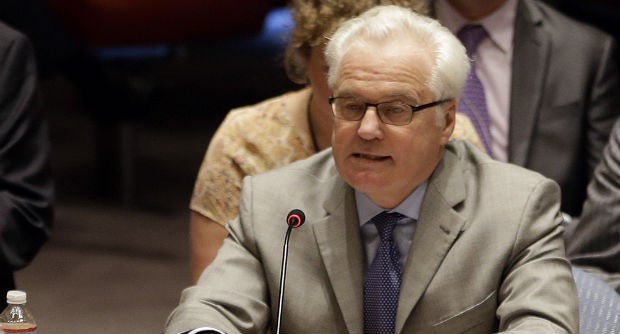 Russian U.N. Ambassador Vitaly Churkin speaks as the U.N. Security Council meets to discuss the humanitarian situation in Ukraine, Tuesday, Aug. 5, 2014, at the United Nations headquarters. The spread of fighting into Donetsk could result in an alarming escalation in the humanitarian crisis gripping the country’s easternmost regions. AP

UNITED NATIONS — A senior U.N. official warned the Security Council at an emergency meeting Tuesday that the humanitarian situation in eastern Ukraine is steadily worsening as power and water supplies are scarce, homes are destroyed and health workers flee.

John Ging, director of U.N. humanitarian operations, said that violence, especially in urban areas, will put more people at risk and lead to “an increase in the numbers killed” if a political solution can’t be reached.

“Immediate action is therefore required to prevent this,” he told council members. To date, 1,367 people, civilians and combatants, have been killed, Ging said.

The meeting, requested by Russia, comes after fighting in eastern Ukraine reached the main rebel stronghold of Donetsk. Pro-Russia separatists and government troops on Tuesday exchanged rocket fire in the latest clashes since the two sides began battling in April.

Ukraine and Western countries have accused Moscow of fueling the mutiny with weapons and soldiers, a claim the Russian government has repeatedly denied.

Ukraine’s deputy ambassador Oleksandr Pavlichenko denied there was a humanitarian crisis in Ukraine but said the humanitarian situation in Donetsk and Luhansk is still serious. “The situation is manageable by the government of Ukraine, which remains open to cooperation with international partners,” he said.

In Donetsk and Luhansk, the water supply has been cut to a few hours per day, health supplies are running low and an estimated 70 percent of health personnel have fled, he said.

Just over 4,000 people have been wounded in eastern Ukraine since April. About 58,000 people have left since early July, and more than a thousand others are fleeing each day, Ging said.

Russia’s U.N. Ambassador Vitaly Churkin said the situation in the east, particularly in Luhansk and Donetsk, is “disastrous.” He accused the Ukrainian military of indiscriminate shelling of housing. In many small towns, he said, 80 percent of the houses have been destroyed and hundreds of buildings have collapsed.

Churkin said Russia wants to send a humanitarian convoy to Luhansk and Donetsk under the auspices of the International Committee of the Red Cross.

Fighting across eastern Ukraine has forced more than 285,000 people to flee their homes, according to U.N. figures released Tuesday. The U.N. refugee agency said more than 117,000 have left for other places inside Ukraine, while another 168,000 have crossed into Russia.

US, Europe slap Russia with toughest sanctions yet