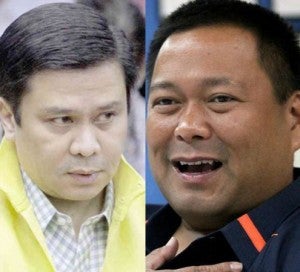 Detained Sen. Jose “Jinggoy” Estrada (left) on Tuesday said the plan of his half-brother, fellow opposition Sen. JV Ejercito (right), to deliver a counter-State of the Nation Address did not have the consent of the minority. FILE PHOTOS

MANILA, Philippines–Detained Sen. Jinggoy Estrada on Tuesday said the plan of his half-brother, fellow opposition Sen. JV Ejercito, to deliver a counter-State of the Nation Address (Sona) did not have the consent of the minority.

Speaking with reporters after his bail hearing at the Sandiganbayan, Estrada said he and the other members of the Senate minority did not make any contribution to the contents of the speech which Ejercito is expected to deliver on the Senate floor next week.

“Our minority leader is currently detained,” Estrada said, referring to his coaccused, Sen. Juan Ponce Enrile, who is being held at the Philippine National Police General Hospital at Camp Crame, Quezon City.

“So Senator Enrile has no input. I have no input (as well as the other members of the minority). I think he is doing it on his own without any authority from the minority,” he said.

Estrada, who had been at odds with his half-brother over the local politics in San Juan City, had been spending time at the PNP Custodial Center at Camp Crame since the antigraft court ordered his arrest last month.

After visiting Enrile at his hospital room at the police camp on July 9, Ejercito said the 90-year-old legislator agreed to his proposal for the opposition senators to draft a speech to negate the annual Sona speech which President Aquino delivered last July 28.

It is a tradition for the position bloc in both the Senate and the House of Representatives to make their own assessment of the country’s condition to counter the Sona of the sitting chief executive.

“I asked him if it is OK if we draft an anti-Sona(speech). He said it’s (the right thing to do),” Ejercito said.

During his conversation with Enrile, he said he also told the minority leader of his plan to be more active in the Senate.

Sen. Bong Revilla is also detained for his alleged complicity in the P10-billion pork barrel racket. They had also been ordered suspended for 90 days.

Their detention left the Senate minority with only four members- Ejercito and Senators Nancy Binay, Gringo Honasan and Tito Sotto.

JV Ejercito sets aside differences with beleaguered half brother