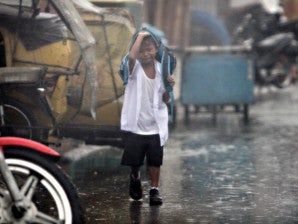 MANILA, Philippines—Although it has weakened, Typhoon Jose (international name: Halong) whipped up the southwest monsoon (habagat) rains Monday, forcing the suspension of classes in Cavite and Bataan provinces on Tuesday.

Gov. Jonvic Remulla announced ‎through Twitter that Tuesday’s classes in all levels in the entire province of Cavite will be suspended due to the monsoon rains.

On Monday,‎ classes in all levels were suspended in Bataan province and will remain suspended Tuesday, according to the Department of Education.