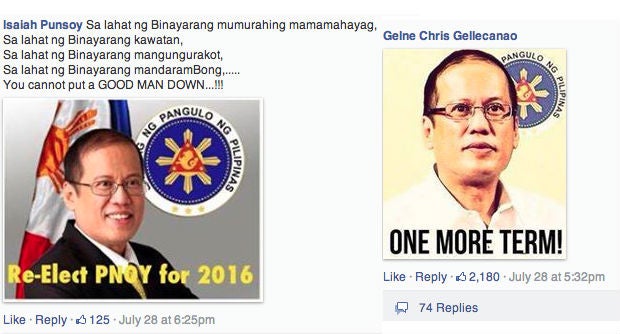 MANILA, Philippines – Despite being prohibited by the Philippines Constitution, some netizens are calling for the re-election of President Benigno Aquino III.

Reminding the public of the constitutional ban on re-election of presidents, Malacañang on Sunday said it had no hand in the said campaign.

He said Filipinos should respect the Philippine Constitution.

(We had nothing to do with such claims. That is just a spontaneous and natural expression of their feelings.)

On Aquino’s Facebook Page, which has 4 million followers, supporters have been posting messages and photos bearing the words “ One More Term” and “Re-Elect Pnoy for 2016.”

Coloma, however, said that such calls were not surprising because of the nature of social media.

(No one has control over social media. So despite such calls, we would just have to remind the public of the constitutional provision that a president only has one term consisting of six years, and that is where that discussion should end.)

Aquino has lately been receiving flak for various issues, especially the Disbursement Acceleration Program. But while his performance ratings have been on a decline, Aquino’s followers have also started drumming up support for the beleaguered president.

Kris Aquino to President Benigno III: The silent majority still believes in you