First Ebola case on US soil as doctor returns home 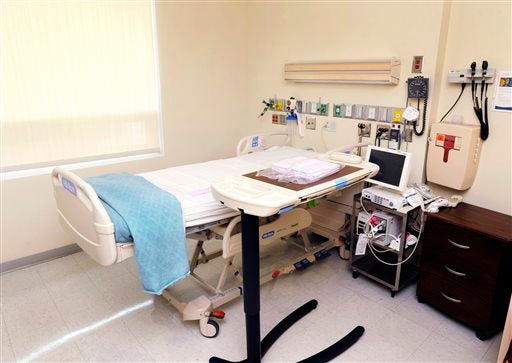 WASHINGTON—The deadly Ebola virus landed on US soil for the first time on Saturday when an American doctor infected by the disease returned home on a private jet before being whisked to a state-of-the-art hospital isolation unit.

Footage of the arrival filmed from long-distance showed the jet pulling up at an aircraft hangar where it was met by an ambulance and several vehicles.

Local television networks then followed the convoy live as it wound its way across Atlanta to Emory University Hospital in Atlanta.

Images showed three individuals wearing white bio-suits emerge from the ambulance, with one appearing to be led gingerly into the hospital.

Brantly and Christian missionary worker Nancy Writebol are in serious but stable condition after becoming infected as they helped to battle an Ebola outbreak which has left more than 700 people dead in west Africa since March.

Writebol is expected to be airlifted back to the United States in the coming days by the same method as Brantly.

“We thank God that they are alive and now have access to the best care in the world,” said Franklin Graham, president of Samaritan’s Purse, the organization Brantly was working for after the doctor arrived home.

“We are extremely thankful for the help we have received from the State Department, the CDC, the National Institute of Health, WHO and, of course, Emory Hospital,” Graham added in a statement.

A Gulfstream private jet fitted with a mobile isolation unit, designed to transfer employees from the US Centers for Disease Control and Prevention (CDC) exposed to contagious diseases, is being used to transport the evacuees.

Brantly and Writebol will be treated at Emory’s cutting-edge isolation unit, which has previously been used to treat individual infected during the SARS epidemic which erupted in Asia in 2003.

It is one of only four such facilities in the United States and is located near the CDC headquarters in Atlanta.

“It is physically separate from other patient areas and has unique equipment and infrastructure that provide an extraordinarily high level of clinical isolation,” Emory Healthcare said in a statement.

Brantly’s arrival marks the first time a patient infected with Ebola has been treated anywhere in the United States.

But the arrival of the first case has triggered anxiety in some quarters, with television personality Donald Trump arguing that the patients should be barred from returning to American soil.

However Bruce Ribner, who oversees the isolation unit at Emory, dismissed the criticism of the decision to airlift the aid workers.

“They have gone over on a humanitarian mission [and] they have become infected giving medical care,” said Ribner.

“We owe them the right to receive the best medical care that is available.”

The US State Department said the “safety and security of US citizens” remained the paramount concern.

“Every precaution is being taken to move the patients safely and securely, to provide critical care en route on a noncommercial aircraft, and to maintain strict isolation upon arrival,” a State Department spokeswoman said.

The latest outbreak of Ebola in west Africa has killed 729 people of the more than 1,300 infected since March.

The World Health Organization has said the fast-moving outbreak was causing “catastrophic” loss of life in the affected countries of Guinea, Liberia, Nigeria and Sierra Leone.

Ebola, which has no vaccine, causes severe muscular pain, fever, headaches and, in the worst cases, unstoppable bleeding.

It has killed around two-thirds of those it has infected since its emergence in 1976, with two outbreaks registering fatality rates approaching 90 percent.

Read Next
Israel says ‘no point’ in negotiating Gaza truce
EDITORS' PICK
Unleash the photographer in you this World Photography Day with vivo smartphones
Palace warns sugar hoarders after raid on Pampanga warehouse
Look Through: The fate of impounded stray dogs
What to watch out for when selecting a video surveillance solution
House energy committee chair Arroyo bats for cheap electricity
Metro Manila’s COVID-19 cases on downward trend, but surge not over — OCTA
MOST READ
Man abducted in Batangas gasoline station, found dead in Quezon
LOOK: Miel Pangilinan dazzles in glittery pre-debut shoot
WATCH: Rick Astley re-creates ‘Never Gonna Give You Up’ music video 35 years later
August 19 a special non-working holiday in Quezon City
Don't miss out on the latest news and information.