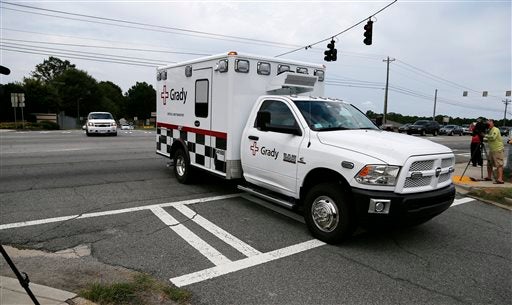 An ambulance departs Dobbins Air Reserve Base, Saturday, Aug. 2, 2014, in Marietta, Ga. Officials at Emory University Hospital in Atlanta expect an American that was infected with the Ebola virus to be transported today. AP

NEW YORK — An American doctor infected with the Ebola virus in Africa arrived in Atlanta for treatment Saturday, first landing at a military base, then being whisked away to one of the most sophisticated hospital isolation units in the country, officials say.

An ambulance from Atlanta’s Grady Memorial Hospital left the base shortly after the jet landed and drove the 15 miles or so toward Emory University Hospital where Brantly and another aid worker will be treated.

The ambulance with red marking was flanked by a few SUVs and police car en route to the hospital along an Interstate.

The second patient, Nancy Writebol, will follow a few days later, the hospital has said.

The specialized unit at Emory University Hospital was opened a dozen years ago to care for federal health workers exposed to some of the world’s most dangerous germs. Health experts say a specialized isolation unit, though, is not needed for treating an Ebola patient. The virus does not spread through the air, so standard, rigorous infection control measures should work at any hospital.

The two seriously Americans who worked at a hospital in Liberia, one of the three West Africa countries hit by the largest Ebola outbreak in history.

The Emory hospital unit is located just down a hill from the Centers for Disease Control and Prevention. It is one of about four such units around the country for testing and treating people infected with dangerous, infectious germs.