House to press probe of SC ‘pork’ ahead of impeach complaints 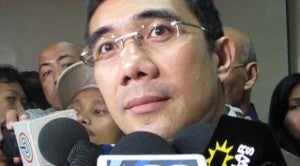 MANILA, Philippines–The House of Representatives intends to prioritize the scrutiny of the alleged “pork barrel” and allowances of the Supreme Court justices over impeaching President Aquino, according to administration ally Iloilo Rep. Niel Tupas Jr.

Tupas chairs the House committee on justice which puts him in the enviable position of handling the measures seeking to abolish the P1.775 billion Judiciary Development Fund (JDF) and Special Allowances for the Judiciary (SAJ), on the one hand, and the three complaints to impeach the President for culpable violation of the Constitution and betrayal of public trust in connection with the Disbursement Acceleration Program (DAP) and the Enhanced Defense Cooperation Agreement (Edca), on the other.

In a text message, Tupas said his committee would start the judicial fund probe as early as next week while work on the three impeachment complaints filed last week would likely be started by the end of next month.

“The JDF bills may be referred to the committee this week so we may start the hearing next week or the latest would be the week after next,” he said.

In the case of the impeachment complaint against the President filed by militant groups, Tupas noted that under the rules, Speaker Feliciano Belmonte Jr. has 10 session days to include it in the House’s order of business and the committee on rules has three days to refer it to his committee. With the House holding only three sessions a week, the impeachment complaints would most likely not reach the committee level until after a month.

“It’s likely that we will tackle the JDF first before the impeachment. But once the impeachment complaints are referred to the committee, we will hear [them in] separate hearings in a week,” said Tupas.

Kabataan Rep. Terry Ridon, who endorsed the impeachment complaint filed by youth groups, said that this was part of Malacañang’s battle plan in Congress to frustrate any effort to probe the DAP disbursements.

“This is a clear attempt by Palace allies in Congress to divert public outrage over the DAP. Addressing the impeachment complaint is a far more important business of the day,” said Ridon who was part of the Makabayan bloc that walked out of the session hall as the President was set to deliver his State of the Nation Address last Monday.

Bayan Muna Rep. Carlos Isagani Zarate denounced the “judiciary shakedown” by Aquino’s allies in the House as putting “undue pressure” on the Supreme Court and the judiciary.

He said this was “payback” for the President after he suffered rejection at the hands of the Supreme Court with regard to the now outlawed DAP and the congressional pork barrel, or the Priority Development Assistance Fund.

“Our colleagues must realize that the people demand accountability from the President through the process allowed by the Constitution. Undermining the judiciary’s independence is not the way forward and it is only rightful for the people to rally behind the judiciary on this,” Zarate said.

Tupas and Ilocos Norte Rep. Rodolfo Fariñas have filed separate bills seeking to abolish the JDF by repealing the decree that created it, Presidential Decree 1949 issued by the dictator Ferdinand Marcos 30 years ago, and replace it with a more transparent system of auditing high court spending.

Tupas has also pushed for the repeal of Republic Act No. 922 that created the SAJ which allows the justices to earn allowances equivalent to their monthly salary.

He said the JDF and the SAJ should be under the management of the National Treasury and subject to the scrutiny of the Commission on Audit.

The other impeachment complaints were the ones filed by the Bagong Alyansang Makabayan (Bayan) citing Aquino for culpable violation of the Constitution in implementing the DAP—a supposed economic stimulus program that created and used “forced” savings which the Supreme Court declared unconstitutional last July 1—and a third one filed by a group led by former Bayan Muna party-list representative Satur Ocampo seeking to impeach the President for entering into an agreement with the US that would give American soldiers access to military bases in the country.