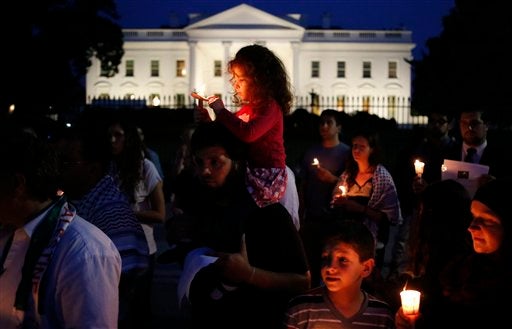 Wafa, 3, sits on the shoulders of her father Mahmoud Abuarqoub, a Palestinian American from Baltimore, Md., as demonstrators hold a vigil for the victims of the fighting between Israel and Hamas in Gaza in front of the White House in Washington, Wednesday, July 30, 2014. (AP Photo/Charles Dharapak)

WASHINGTON — The White House says there is little doubt Israeli artillery hit a United Nations school in Gaza and is describing the shelling as “totally unacceptable and totally indefensible.”

White House spokesman Josh Earnest cited statements from the U.N. blaming Israel for the shelling, as well as the Israeli government’s acknowledgement that it was firing in the area of the school.

Earnest says that while the U.S. supports a full investigation into the matter, “it does not appear there’s a lot of doubt about whose artillery was involved.”

In its initial statements after the shelling, the White House condemned the attack but specifically did not assign responsibility.

Earnest reiterated that Israel can do more to ensure the safety of civilians in the clashes between Israel and Hamas.

While the U.S. says it supports Israel’s right to defend itself against Hamas, officials have repeatedly called on Israel to do more to stem civilian casualties. More than 1,300 Palestinians, mostly civilians, and more than 50 Israelis, almost all of them soldiers, have been killed since July 8.

The White House continues to call for an immediate humanitarian cease-fire but there appeared to be little sign that one was imminent. Israeli Prime Minister Benjamin Netanyahu said Thursday that Israel will destroy the Hamas tunnel network in the Gaza Strip “with or without a cease-fire,” as the military called up another 16,000 reservists to pursue its campaign in the densely-populated territory.

Read Next
Suit filed over alleged delays, denial of US citizenship to Muslims
EDITORS' PICK
Petition to reverse Comelec decision on Bongbong Marcos’ DQ case reaches SC
Luxe property: A way to build, preserve wealth
Congress canvassing of votes for president, VP to begin May 24
PH detects local transmission of Omicron subvariant BA.2.12.1
House energy committee chair Arroyo bats for cheap electricity
Honolulu Café is the cure for your Egg Tarts and Roastings cravings
MOST READ
Heart Evangelista gets a ‘no’ from Chiz Escudero after asking, ‘Do I deserve a bag?’
CebuPac places pilot under disciplinary review after ‘baseless’ post vs Robredo
Closure order vs Megaworld Corp halted as firm vows cooperation with BIR – exec
Duterte OKs law extending validity of registration, license to carry firearm
Don't miss out on the latest news and information.