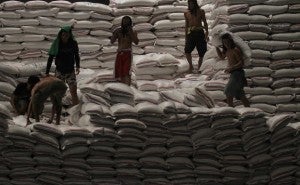 The raid was the first in Western Visayas after President Aquino ordered a crackdown on rice hoarders after rice prices soared amid a suspected artificial shortage.

The NBI operatives and NFA personnel raided the warehouse in Barangay (village) Napnod in Leganes town, 11 kilometers north of Iloilo City about 12:30 a.m. on Thursday.

The operatives recovered 21 bags of NFA rice, including five in a truck and 16 others under the vehicle.

Inside the warehouse, the operatives recovered 1,045 bags of rice in unlabeled bags believed to be repacked NFA rice. Also found were empty white and orange colored rice bags without markings or labels.

“We believe the NFA rice was being repacked to be sold commercially,” Sargado told the Philippine Daily Inquirer.

Republic Act 7581 (Price Act Law) prohibits the repacking and hoarding of NFA rice. Violators face imprisonment from five to 15 years imprisonment and can lead to loss of business accreditation and blacklisting.

NFA personnel took samples of rice in the unlabeled bags to confirm if these were NFA rice as required in legal processes. NBI agents also placed the warehouse under guard to ensure that the rice would not be taken out.

The warehouse is registered to Dennis Devicente who was not in the area during the raid, according to Sargado.

He said the workers admitted that they were hired to repack the rice.

He said the warehouse was among those placed under surveillance after President Aquino ordered law-enforcement agencies to apprehend and prosecute rice hoarders and those illegally repacking and selling NFA rice.

The NBI also received tips that illegal repacking was being done in the warehouse.

“This is a continuous operation and we will not stop as long as these illegal activities continue here,” Sargado said.