Gov’t can’t do away with lump sums—Palace

MANILA, Philippines—Malacañang on Thursday admitted that the government cannot do away with lump sums or budgetary items that have no break down.

“It is based on established management practice that it is customary for a certain portion of the budget to be set aside for expenditures that cannot be precisely determined at the start of the year,” Communications Secretary Herminio “Sonny” Coloma Jr. said in a televised press briefing when asked about the Special Purpose Funds (SPF).

Of the P2.606 trillion proposed national budget, P501.67 billion will be allocated for SPF. Budget Secretary Florencio “Butch” Abad earlier explained that the SPF is lump sum in nature because details have yet to be finalized.

Coloma reiterated that the lump sum will only be used for special circumstances such as calamities.

“For example, calamities, we only know that there is an average of 20 typhoons every year, but we do not know exactly how many. While we hope that there would be minimal damage, we also know from experience that there can be considerable damage,” he said.

Of the P501.67 billion, P378 billion are programmed appropriations while P123 billion are unprogrammed items, which will only be appropriated when additional sources of revenues are identified.

Coloma pointed out that even “well-run organizations” allot provisions for future expenditures that cannot be determined at the start of the year.

He dismissed accusations that the SPF was another “presidential pork barrel.”

The Philippine government has been receiving flak for so-called lump sum funds which have been associated with graft and corruption. Among the supposed lump sum funds that are no longer being implemented are the Priority Development Assistance Fund (Pdaf) and the Disbursement Acceleration Program (DAP).

Below is the breakdown of the SPF: 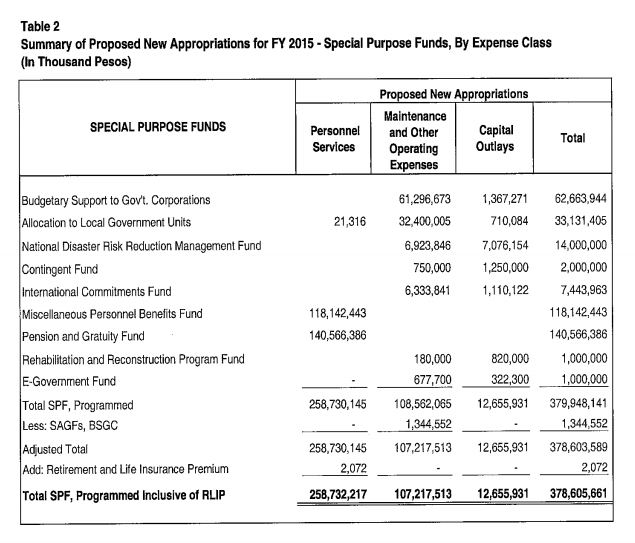 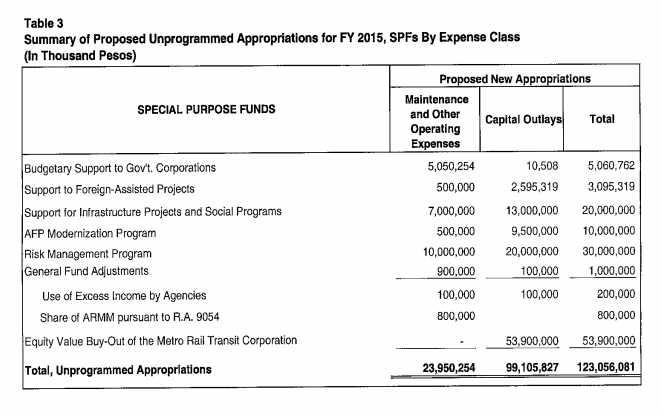 Read Next
Binay not seeking Aquino’s 2016 backing but will be glad to get it—Nancy Binay
EDITORS' PICK
Acer starts the year off strong with the Aspire Vero National Geographic Edition
PH logs 37,070 more COVID-19 cases; over 33K others recover
The best of bayside and city living at SMDC’s Sail Residences
Comelec division junks petition to cancel Marcos COC for president
Marcos camp ‘extends hand of unity’ after COC cancellation bid is denied
Over 3 Million worth of prizes to be won at Smart Padala’s SENDali Manalo Promo!
MOST READ
NBI foils escape attempt of Kerwin Espinosa, two others
Comelec division junks petition to cancel Marcos COC for president
Francine Diaz’s manager denies actress is being courted by Seth Fedelin
‘Not my loss’: Did Kris Aquino just comment on her breakup with Mel Sarmiento?
Don't miss out on the latest news and information.