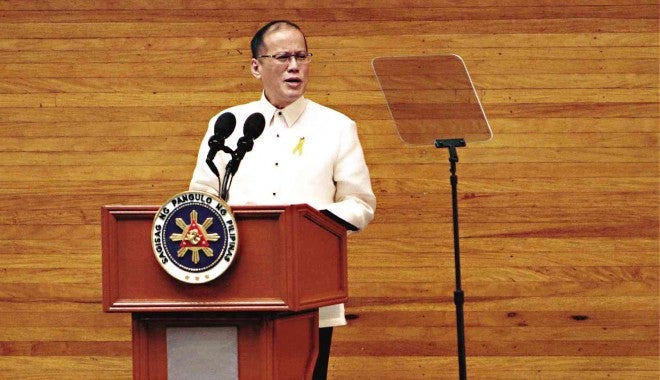 Presidential spokesman Edwin Lacierda on Wednesday appeared confounded by talk that Aquino’s show of emotion at his penultimate State of the Nation Address (Sona) had something to do with ill health.

“He’s fine. He’s fine. So I don’t know where this relation between his health and what he mentioned… He’s perfectly fine,” Lacierda said at a Malacañang press briefing.

Monday’s Sona was probably the first time for the public to witness an emotional display from Aquino.

He is always a picture of composure, even when his father, opposition Sen. Benigno Aquino, Jr. was assassinated on Aug. 21, 1983, and his mother, the late President Corazon Aquino, succumbed to cancer on Aug. 1, 2009.

Aquino’s voice cracked toward the end of his speech as he talked about serving the nation the best he can as President, inspired by the legacy and sacrifices of his parents.

He even touched on his own mortality, saying how he would be content having lived his “second life” dedicating it to starting reforms in a society hobbled by corruption.

During his mother’s presidency, the young Aquino survived an ambush during the 1987 coup attempt. A bullet remains lodged in his neck.

The President has had a bout with the flu, rhinitis and the common cold in the past four years.

In November 2012, the President missed a meeting with International Monetary Fund chief Christine Lagarde because he had the flu.

Malacañang has always given assurances that Aquino, a heavy smoker, is in good health and is fit to handle the heavy workload of a chief executive until the end of his term on June 30, 2016.

The Constitution, however, requires public disclosure of the state of the President’s health, particularly if the illness is “serious.”

“In case of serious illness of the President, the public shall be informed of the state of his health. The members of the Cabinet in charge of national security and foreign relations and the Chief of Staff of the Armed Forces of the Philippines shall not be denied access to the President during such illness,” states Article VII, Section 12 of the Constitution.