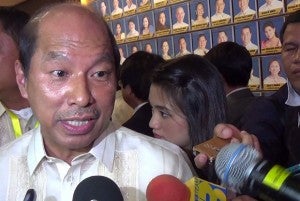 MANILA, Philippines – For the Budget Secretary, the government’s proposed P2.606 trillion for the 2015 national budget will no longer be subject to the whims of pork-hungry lawmakers.

This was Secretary Florencio “Butch” Abad’s statement as he submitted to the House of Representatives the proposed budget, which is 15.1 percent higher than the P2.265 trillion approved budget in 2014.

The budget was passed following the Supreme Court’s decision to scrap from the country’s purse billions of discretionary funds for lawmakers called the Priority Development Assistance Funds (PDAF).

These so-called “pork barrel” funds were declared unconstitutional at the height of the scandal over the alleged scam of pillaging these funds to ghost projects for kickbacks under the scheme of accused mastermind Janet Lim-Napoles.

The investigation of the scam has resulted in the detention of three senators and their aides for their alleged involvement.

In an interview, Abad said lawmakers will have limited power in exercising their discretion over the national budget.

He added that the Supreme Court has ruled that Congress can only intervene during the period of budget preparations and authorizations. This means lawmakers will no longer be allowed to identify projects that were previously funded under the lumpsum “special purpose” funds as PDAF.

“Once the budget is executed, it’s very clear that they cannot intervene or propose amendments to the budget,” Abad said.

The practice had been that even after the budget is passed, lawmakers may introduce pet projects that would be funded by their annual allocation of PDAF.

After PDAF was scrapped, lawmakers can no longer exercise and this and are now compelled to identify their projects early on and submit these as line items to the budget department.

Abad said should representatives have concerns over their projects, the only power left to them is to approach line agencies that would serve as the implementing agency.

Asked what the budget department could do should the lawmaker use his power to influence the implementing agencies, the Cabinet official said they could not prevent these solons from using their positions.

“We cannot prevent them for their exercise of power on their budget,” Abad said.

“For the representatives who have concerns about their districts, they would have to refer to the line agencies to make representations during the budget hearing,” the Cabinet official said.

“This budget does not contain PDAF. The PDAF is a post-budget identification of projects. There’s no such thing in this budget,” Belmonte said.

“The reason is that the projects are already contained here or the representatives have it in their minds now, which they can take up in their deliberations,” the Liberal Party stalwart added.

But the Speaker remained evasive after the submission of budget. He refused interviews from reporters.

In his speech during the opening of the second regular session, Belmonte had said due to the absence of PDAF, Congress should find “new legislative paths” to bring services to their constituents.

Asked what this means, Appropriations committee chair and Davao city Rep. Isidro Ungab said this means lawmakers are now directed to the implementing agency to submit their list of projects.

“My interpretation is that the representatives should talk with the departments of implementing agencies as early as during the budget preparation para masama ang kanilang pet projects,” Ungab said.

“The congressman as legislator has no more role in the budget after its approval,” he added.

The breakdown of the P2.606 trillion budget: