What is Binay’s advice to Aquino in dealing with critics? | Inquirer News
Close
menu
search

What is Binay’s advice to Aquino in dealing with critics? 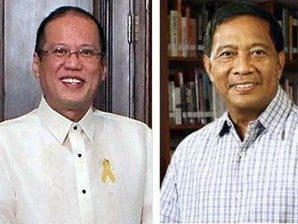 MANILA, Philippines – Vice President Jejomar Binay has been advising President Benigno Aquino III to keep his cool amid the criticisms thrown at him and his administration.

Binay, in an interview with the ABS-CBN News Channel after the State of the Nation Address (Sona) on Monday, said he had spoken with the President about such problems.

(I told him, ‘You know Mr. President, you should get used to it. It’s really like that, the essence of real democracy is that there will be critics and supporters. Perhaps it is only in the end when you will be judged if you were right or wrong. Criticisms are really part of democracy. As they say, you lose if your are short-tempered.)

Aquino spent a couple of minutes during his Sona to complain and berate his critics. He said the “noisiest and the loudest” were the ones who were banking on the failure of reforms.

He said they do not only oppose him but the Filipino people.

“We have grown used to being greeted by negative commentators for breakfast, personal attacks for lunch, insults for dinner, and intrigue for a midnight snack,” Aquino said.

Binay himself has been pitted against Aquino in the past. Although mostly mum on controversial issues concerning the President, being an opposition leader has seemingly strained their relationship.

Throughout his media interviews, Binay gave neutral answers. He acknowledged that Aquino indeed became emotional during in his speech and that “when you appeal to the heart, there is always that presumption that it’s genuine.”

However, when asked about what grade he will give the President for his Sona, he returned the question to the reporter.

(How about you, what do you think?)

Binay refused to talk about the Disbursement Acceleration Program (DAP), which was declared partly unconstitutional by the Supreme Court, because he said it would be sub judice or still under judgment of the court. On the other hand, he said he wanted to hear about the prospects of the Freedom of Information (FOI) bill, which was not mentioned in the speech as it remained stalled in the House of Representatives.

At one point in his speech, Aquino recalled the times when he and Binay were still on the same side.

Binay had been close to the late Corazon Aquino, Aquino’s mother and former President, who appointed him as mayor of Makati City after the Edsa people power uprising.

“The Vice President knows this—we were together in 1987. There was a coup d’état, and I was ambushed. Everything after that I consider my second life,” Aquino said during his Sona, right before he became emotional.

Binay was shown on-screen, slightly nodding but not giving any hint of emotion.

A Philippine Daily Inquirer report said the Vice President barely clapped during the one and a half hour speech of Aquino.

Earlier this month, reports also came out that Binay was the only Cabinet member who did not applaud Aquino’s decision to retain Budget Secretary Florencio Abad amid his offer to resign over the DAP controversy.

He later told Radyo Inquirer 990AM that while he respected Aquino’s decision, he believes that the President should have accepted the resignation.

Binay said Aquino had been kidding him about attempts to ruin their relationship. However, he did not say if Aquino’s mention of him during the Sona was meant to show that they were still in good terms.