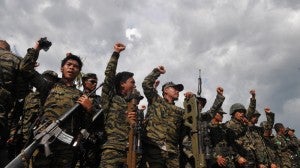 “Clearly any major movement that is not normal administrative functions like this case constitute ceasefire violations when the CCCHs did not coordinate. The government forces know this very well but unfortunately they acted in contravention,” Ladiasan said.

Efforts to reach the military commander, who has jurisdiction over Maguindanao, have repeatedly failed.

But as early as last week, the Philippine Army’s 6th Infantry Division spokesperson, Col. Dickson Hermoso, had made public the military’s intention to deploy more soldiers against Bangsamoro Islamic Freedom Fighters’ gunmen responsible for a series of harassment against government troops in Maguindanao and the nearby province of North Cotabato.

At least 18 people, 17 BIFF men and one soldier, were killed in the violence that started July 21.