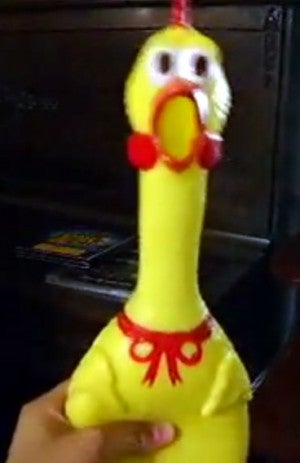 MANILA, Philippines – A toxic watch group is seeking the removal from the local market of a Chinese-made plastic toy called “Shrilling Chicken” after two European countries banned its sale because of serious health and environmental risks.

EcoWaste Coalition said that the “Shrilling Chicken,” which is made of yellow and red polyvinyl chloride (PVC) plastic and screams when squeezed, contains highly toxic chemicals. The toys are still sold locally at prices ranging from P80 to P100 although the Czech Republic and Sweden have pulled the toys out of their markets to protect their children and society from possible exposure to carcinogenic substances.

EcoWaste’s Project Protect coordinator Thony Dizon, describing the toys as “cute but very dangerous,” said that the European countries’ ban on “Shrilling Chicken” was included in the Rapid Alert System for Non-Food Dangerous Products (RAPEX) report 29 issued Friday by the European Union. While the Czech Republic stripped the store shelves of the toy this month, Sweden banned the “Shrilling Chicken” in August 2013.

“The Philippine government should waste no time and exterminate the ‘Shrilling Chicken,’ which has been in the local market since 2010,” Dizon said.

EcoWaste cited the RAPEX report 29 in which the Czech government said that the toy “poses a chemical risk because it contains 0.98% by weight of phthalate DEHP,” and violates the EU’s ban on diethylhexyl phthlate (DEHP), dibutyl phtalate (DBP) and benzyl butyl phthalate (BBP) in all toys and childcare articles.

DEHP is a manufactured chemical, a colorless liquid with hardly any odor, commonly added to plastics to make them flexible. DBP is used to make flexible plastics found in various consumer products and BBP is mostly used as a plasticizer for vinyl foams.

The Swedish government noted the risk of chemical pollution posed by the product because the plastic used to manufacture the toy contains up to 10 percent short chain chlorinated paraffins (SCCPs), violating European regulations on persistent organic pollutants.

According to the US Environmental Protection Agency, SCCPs are used as lubricants and coolants in metal cutting and metal forming operations and as secondary plasticizers and flame retardants in plastics. They are toxic to aquatic organisms at low concentrations and can remain in the environment for a long period of time, accumulating in animal tissues.

Th US-EPA further noted, “Even relatively small releases of these chemicals from individual manufacturing, processing, or waste management facilities have the potential to accumulate over time to higher levels and cause significant adverse impacts on the environment.”

Dizon added that the International Agency for Research on Cancer has also categorized the phthalate DEHP and SCCPs as among the “Group 2B agents” or substances that are “possibly carcinogenic to humans.”

Apart from pushing for the government ban on the “Shrilling Chicken,” EcoWaste asked vendors to stop selling the toy and return their remaining stocks to the Chinese manufacturer for proper disposal.

They also called on parents who have already bought the products to keep the toys out of their kids’ reach and simply discard them as hazardous waste.

Reports of toxic toys sold in Marikina to be probed