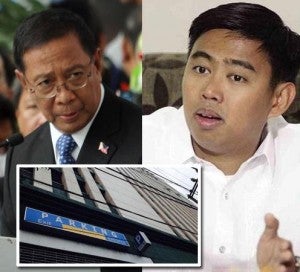 One and a half years before the 2016 presidential election, the political smear campaign against the leading presidential contender, Vice President Jojo Binay, has begun.

And the rocks being hurled at the Binays seem to be hitting their mark.

The latest bombshell against the Vice President and his son, Makati Mayor Junjun, is on the alleged “unconscionable overpricing” of an 11-story parking building which the city government supposedly built for P1.56 billion.

A complaint for plunder has been filed in the Office of the Ombudsman against the father and his son, who have taken turns running the premier city in the manner of a political dynasty.

Mayor Binay’s comment that the complaint is nothing new and “fabricated” does not satisfy the people—especially those in Makati—who have the right to know how their money is spent by those in power.

Junjun said their political opponents were trying to destroy the reputation of his father because he was leading in the latest Pulse Asia survey of possible presidential candidates.

But what the public expects from Junjun is a straight, point-by-point reply to the accusation that he and his father benefited from the parking building’s construction.

If true, the amount supposedly spent for the parking building’s construction is just too much: P1.56 billion.

Did the Makati City government really spend that much for a parking building?

Why did the cost jump to that astronomical amount when the initial budget for the project was only P400 million in 2007?

Junjun should have focused on the issue of gross overpricing and not on the motive of the complainants who, he said, were sour-graping because they lost to the Binays in past elections.

The Binays should brace themselves for more alleged skeletons in their closet being exposed as the presidential election draws near and the campaign gets hotter.

The other alleged irregularities exposed in the past, which died down for one reason or another, will resurface once again.

The incident in Dasmariñas Village, where Mayor Junjun showed his fangs to the security guards who prevented him from using a closed gate, will be recalled along with other issues against the Binays of Makati.

With the Bangsamoro law still to be passed by Congress, the rule of law is not being followed by the Autonomous Region of Muslim Mindanao (ARMM) led by Gov. Mujiv Hataman, a close presidential ally.

Justice Secretary Leila de Lima recently issued an order declaring that the mining tenets issued by the ARMM were all illegal and there was no basis for the continued shipment of mineral ore out of the country.

Minerals dug up from the bowels of the earth are technically owned by the state.

But Hataman and his Chinese-Filipino friends, Michael Chen and Alex Po, allegedly continue to ship out millions of dollars’ worth of mineral ore, to the detriment of the government.

Why haven’t the Department of Justice and Department of Environment and Natural Resources stopped the continued shipment of mineral ore, which is tantamount to mineral theft?