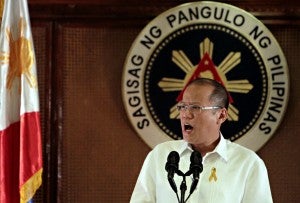 MANILA, Philippines – President Benigno Aquino III on Wednesday again assailed the Supreme Court (SC) for its decision declaring as unconstitutional parts of the Disbursement Acceleration Program (DAP), saying the judiciary had its own cross-border transfers.

(Our belief that the DAP was implemented in accordance with the law was bolstered by the fact that the Supreme Court itself agreed with that kind of mechanism.)

(They requested for the funds to be transferred to be able to construct buildings that will house courts. We don’t see anything wrong with this because it speeds up the judicial system in the country.)

(The only question is if it will be beneficial to the people. If it is then why would we refuse the opportunity to speed up the delivery of services to our bosses?)

(Because it was also done by the Supreme Court…our belief strengthened that what we did was right.)

On July 1, the Supreme Court said that parts of DAP were unconstitutional because it allowed the withdrawal of unobligated allotments, cross-border transfers of savings and funding of projects and use of unprogrammed funds not covered by the General Appropriations Act.

However, Aquino defended the DAP through a national address, saying the projects it had funded benefited many Filipinos.