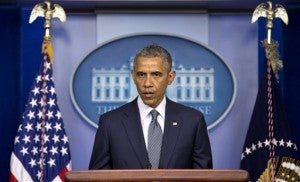 WASHINGTON – US President Barack Obama and Australian Prime Minister Tony Abbott reiterated their calls for an “unimpeded and transparent” international investigation into the downing of a passenger plane in Ukraine.

The White House said the two leaders spoke Sunday evening. They agreed Russia has a responsibility to use its influence with pro-Russian separatists who control the crash site to compel them to cooperate with international monitors and investigators.

At least 37 Australian citizens and residents were on board when the Malaysia Airlines plane was shot down over eastern Ukraine last week.