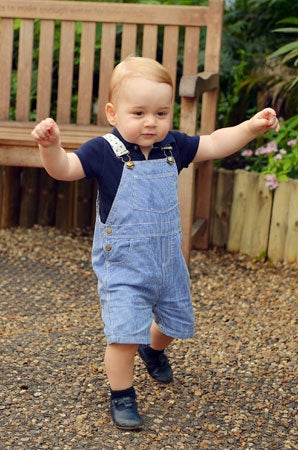 In this photo taken on Wednesday July 2, 2014 to mark his first birthday, Britain’s Prince George walks, during a visit to the Sensational Butterflies exhibition, at the Natural History Museum, London. The prince turns 1 on July 22. AP

LONDON – Britain’s Prince George celebrates his first birthday on Tuesday, capping a year in which the globetrotting infant became the trend-setting face of the modern royal family.

The young prince will mark the occasion with a low-key party at the family home at Kensington Palace, in keeping with the wishes of his parents William and Kate to keep their first-born out of the media glare.

The royals released a new photograph of George on Saturday showing how much he has grown.

Taken a few weeks ago during a visit to London’s Natural History Museum, the picture shows the prince walking confidently with his arms outstretched.

The photographer, John Stillwell, said the future king was “very lively and very sure of himself and confident – a very determined young boy.”

The cherubic royal has charmed onlookers during his few appearances in the public eye, particularly during a recent visit to Australia and New Zealand.

And the arrival of the third in line to the British throne has provided a feel-good factor that has given the royal family a major boost.

Influential magazine Vanity Fair celebrated George’s birthday by putting him on its front cover, calling him a “media star, style icon and PR triumph”, and the world’s “most eligible infant.”

This is high praise for a one-year-old, but perhaps inevitable given the popularity of William and Kate, the young, fun and relatively modern face of the royals.

With William’s brother Harry — – who has joked that his nephew looks like a “young Winston Churchill” — they have helped rebuild the family’s image following its much-criticized response to the death of the princes’ mother Diana in a 1997 Paris car crash.

George will spend his birthday surrounded by close family and friends at home, in sharp contrast to William, who spent his first birthday at home with his nanny while parents Prince Charles and Diana toured Canada.

Royal expert Katie Nicholl rejects suggestions that Charles was a cold parent, however, saying he was partly responsible for William becoming “the modern dad.”

“Charles loved doing bath time and was a doting and loving father, so William is taking a leaf out Charles’s book,” she told AFP.

The Duke and Duchess of Cambridge revealed that George was a loud baby and cried a lot in the early days because he was always hungry.

Over his first year, the young prince is estimated to have consumed 2,901 liters of breast milk, been burped around 4,092 times and gone through 2,735 nappies, according to research conducted by baby-gift website  my1styears.com.

George, the great-grandson of Queen Elizabeth II, “doesn’t go to play groups”, said Nicholl, but he enjoys play dates with the young children of friends.

He appeared comfortable when romping with other tots during a play date in New Zealand, as part of the family’s official three-week visit Down Under.

Kate’s fashion choices are closely watched and Prince George is building up his own following.

“It’s the way his parents dress him in traditional clothes, like collared shirts and smart little shorts which really make him so cute and stylish,” said Nicholl, author of biography “Kate — the Future Queen.”

My1styears founder Daniel Price added: “If he’s spotted wearing or doing anything, then it becomes a sell out or a new trend every mum and dad wants a part of.”

Guests to the birthday party are faced with the quandary of what to buy for the baby with everything, but there is one pleasure even a pampered prince will have to defer.

“One thing George will be receiving is a magnum of red wine from the Otago Valley in New Zealand, which the couple visited in April,” said Nicholl.

“It will be laid down in the cellar at Kensington Palace until he turns 18.”