Strong winds, rain and poor visibility greeted the royals in Wellington at the start of a three-week tour of New Zealand and Australia.

It will be one of the first times George, who is third in line to the throne, has been seen in public since his birth on July 22 last year.

The baby will only be taken to a few specific engagements throughout the trip, the family’s Kensington Palace residence said.

For Kate, who stepped off the Royal New Zealand Air Force plane in a buttoned-up red coat and pill-box hat, it’s a first visit to either country, but William, second in line to the throne, has visited New Zealand and Australia several times. 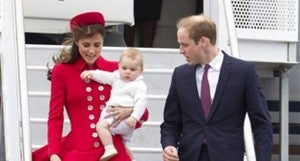 Britain’s Prince William and Catherine, Duchess of Cambridge with Prince George arrive for their visit to New Zealand at the International Airport, in Wellington, New Zealand, Monday, April 7, 2014. AP

Prince Charles and Princess Diana took him on their tour in March and April 1983 and his most recent trip was in 2011, when he comforted victims of the Christchurch earthquake and devastating floods in Australia.

The Duke and Duchess of Cambridge were treated like celebrities when they visited Canada soon after their wedding in 2011, while last year they toured Singapore, Malaysia, the Solomon Islands and Tuvalu as representatives of Queen Elizabeth II on her Diamond Jubilee.

Their visit has already sparked intense interest in New Zealand, with discussion ranging from whether George’s baby car seat has been correctly installed to whether the country should retain the monarchy.

Former deputy prime minister Don McKinnon said over the weekend that it was “inevitable” New Zealand would become a republic, even though people still felt great respect for the royals.

Prime Minister John Key said he did not believe change would happen any time soon, saying there was “robust support” for the monarchy in New Zealand which had increased in recent years.

“If you go back… maybe a decade and asked the question whether New Zealanders want to become a republic then I think the numbers would have been sixty-forty opposed,” he told public radio.

“If you asked that question today I think it would be eighty-twenty opposed.”