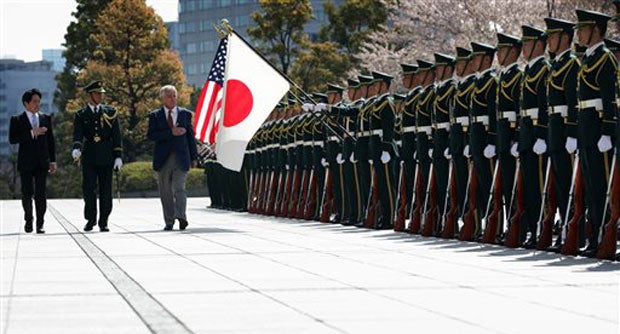 TOKYO  — U.S. Defense Secretary Chuck Hagel is expected to get a rare tour Monday of China’s first aircraft carrier, becoming the first foreign visitor to go aboard the ship.

A senior defense official said Hagel requested the visit, which comes a day after he told reporters that China must better respect its neighbors — a pointed allusion to Beijing’s ongoing territorial dispute with Japan and others over remote islands in the East China Sea. He also has continued to urge Beijing to be more transparent about its expanding military.

China spent a decade refurbishing the derelict Soviet-era carrier bought from Ukraine before commissioning it as the Liaoning in 2012. It moved to Qingdao in February 2013 and is part of a major expansion of the Chinese navy that includes sophisticated new surface ships and submarines.

On Dec. 5, early in the Liaoning’s trial run, one of the Chinese ships accompanying it was involved in a near collision with a U.S. Navy cruiser, the USS Cowpens, when it was operating in international waters in the South China Sea. U.S. Navy officials said the Cowpens maneuvered to avoid the collision, but it marked the two nations’ most serious sea confrontation in years.

At the time, a Chinese media report said the U.S. ship got too close to the Liaoning.

Hagel is on a 10-day trip to the Asia Pacific region and was leaving Japan Monday to travel to China. He is scheduled to meet with senior Chinese leaders before traveling to Mongolia, then returning home.