Intramuros cocheros: Hooves, history and hope for a fare hike 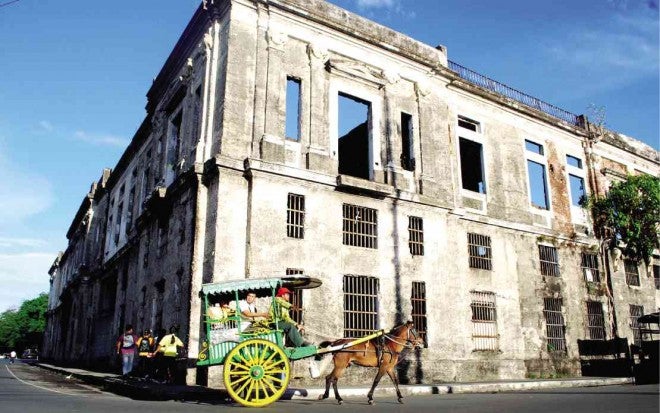 THE FRIENDLY coachmen of the Walled City are not only considered drivers but trained tour guides. NIÑO JESUS ORBETA

Two vans full of Japanese tourists stopped at the steps of the Manila Cathedral. Within seconds, at least five coachmen, who were earlier looking for customers to take on leisurely rides at nearby Plaza de Roma, approached the new arrivals—only to be politely turned down.

The day was just starting for the cocheros of Intramuros, yet they had practically lost count of the times their offers were declined.

“Gone were the days when we didn’t need to peddle our services,” said Danilo Gonzales, 58, vice president of the Samahan ng Magkakalesa sa Intramuros (Saksi), a group of 19 members.

Yes, the friendly cocheros of Manila’s Walled City are organized, uniformed and considered frontliners of local tourism. And like any transport organization, they have pressing needs and wishes including—hold your horses—a fare hike.

In an Inquirer interview on Saturday, Gonzales recalled a time when tourists came in larger droves to the preserved Spanish-era enclave.  It was in 2003, a year after then Tourism Secretary Richard Gordon launched the “WOW Philippines” campaign, when the kalesa was given a more dedicated role to promote Intramuros and was allowed to ply the streets on such a mission up to Chinatown in Binondo.

The marketing slogan may have changed to “It’s More Fun in the Philippines,” but cocheros remain among the first contact points for tourists,  according to Marietta Allaga, urban planning and community development division chief of Intramuros Administration (IA).

IA, she said, regards them not as mere carriage drivers but capable tour guides. “They were given a three-day training on how to communicate properly, speak conversational English, maintain good hygiene, among others. They were also given lessons on history so they would know what to say when asked by their passengers.”

But Gonzales noted a steady decline in the number of riders over the years.

“When we offer our services, tourists would usually explain that they had already traveled many times to the country and seen the places we are offering,” he said. Some visitors also prefer to tour Intramuros on their own, possibly because of the many “do-it-yourself” guides for tourists on the Internet.

A 30-minute ride in any of the Saksi kalesa costs P350 for three passengers. The trip takes them to a number of historical landmarks in the former seat of government of colonial Philippines, including Baluarte de San Diego, Plaza Mexico and Puerto Real.

Still, Gonzales said, the rate is open to some haggling. “Last Friday, I agreed to give two local tourists a trip for only P200. That’s because it was almost midafternoon and I hadn’t made a single trip,” he said.

Saksi president Artemio Marquez said it was not unusual for other coachmen to lower their fares just to have something to take home by the day’s end. Since most of their members do not own the horses and the kalesa they are using, they are forced to lower their fare on lean days. 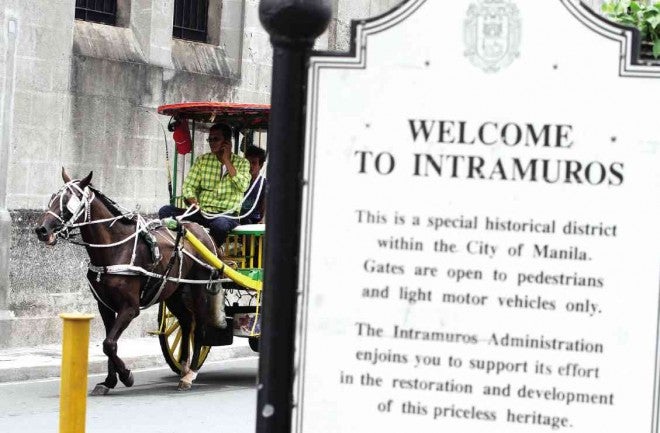 A TOUR around the Spanish-era enclave is not complete without taking the “kalesa.” ARNOLD ALMACEN

“Only six of us own our horses and kalesa,” said Marquez, who had sent two children to college on his coachman’s income for the last 25 years.

Gonzales, despite being a cochero for almost three decades, has yet to have his own horse. Every day he has to remit P400 to the owner of the horse and kalesa he is using—his version of the “boundary” that jeepney or taxi drivers give to their operators. He preferred to call it “rent.”

Under this scheme, there were days when he went home with nothing left of his day’s earnings. Worse, sometimes he had to draw from his savings just to come up with P400.

In 2003, the fare was pegged at P250 for three persons for a 30-minute ride. It was in 2009 when IA, the government agency that oversees the coachmen’s operation, last approved their request for a fare increase.

They now have a pending request to make it “P450 per five passengers.”

The given reason is not only based on economics but on the engineering of the vehicles: Most of the kalesa, Gonzales noted, had already been converted into five- to six-seater transports known as karitela or tartanilla.

In the meantime, she said, the agency is helping the coachmen in other ways, such as providing free veterinary services for the horses.

For now, Gonzales and his peers are pinning their hopes on passengers who want their history lessons about Old Manila on rickety wheels. Very much appreciated are riders who extend their trip to at least an hour and a half—thus ensuring a higher take-home pay for the coachmen.

Intramuros may offer a good stroll down Philippine history, but Gonzales said the retelling of the past could also use some soundtrack, like the sound of hooves echoing off old walls.

“I hope tourists would come here and experience how it was to travel back then and discover all these historic places,” Gonzales said.