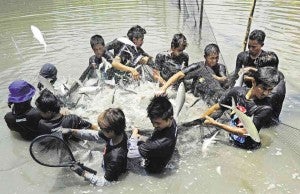 The Disaster Risk Reduction and Management Council  in Calabarzon region composed of Cavite, Laguna, Batangas, Rizal and Quezon estimated losses due to the typhoon at P660,485,457 initially, a big chunk of this from the aquaculture industry, its information officer Frederick Bragas said.

He said several fish cages and fish pens overflowed or were damaged by the wind, allowing tons of milkfish to escape into the open water.

“The loss of the big fish pen operators has become a gain for the small fishermen,” Bragas said.

In this town, a kilo of milkfish was being sold for P30 per kilo on the streets and for P40-P80 inside the public market.

In Cardona, Rizal, the price of a kilo of bangus dropped to as low as P5, according to Riza Gruezo of the Calabarzon regional office of the Department of Agriculture.

The price of bangus before the typhoon ranged from P100 to P135 per kilo.

“I used to sell kakanin (rice cakes) but because there is plenty of bangus to catch, I’m selling fish this time,” said street vendor Evelyn Barrameda.

She said the roof of her house in Barangay San Antonio here was damaged by the typhoon but she could not have it fixed right away as she lacked money.

“The house won’t go away. We can survive under rice sacks (for a roof) because what’s more important is that we earn something to buy rice,” said another street vendor, Doris Pagkaliwagan.

Apart from the damaged fish pens, the typhoon destroyed 12,425 houses all over Calabarzon and caused power outage due to toppled electric posts.

Market vendor Henry Tandang said the price of bangus could stay low for another week or as long as the abundant catch from the lake lasts.

Although the fish is being sold cheap, resident Benjie Villacruel said the problem was how to store it since power has not been fully restored.

Manila health authorities earlier warned against eating bangus that appeared in Pasig River in the wake of the typhoon. The fish reportedly came from the damaged fish pens on Laguna de Bay, often erroneously referred to as Laguna Lake.

However, no such public health warnings have been issued in Laguna and Rizal.

Gruezo said the bangus was safe to eat “as long as the fish was caught alive.”