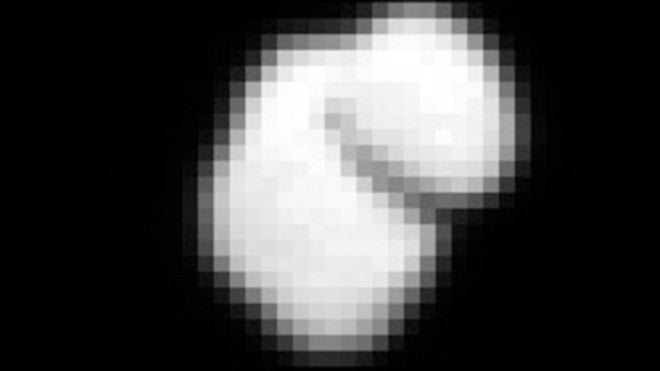 Photo provided by European Space Agency ESA shows a very raw image of Comet 67P/Churyumov-Gerasimenko that was taken by OSIRIS, Rosetta’s scientific imaging system, from a distance of approximately 12 000 km on July 14, 2014 as the space probe approaches the comet. The image suggests that the comet may consist of two parts: one segment seems to be rather elongated, while the other appears more bulbous. (AP Photo/ESA)

BERLIN — A space probe aiming to become the first to land on a comet has taken images that appear to show its target could actually be two separate lumps of rock and ice, scientists said Thursday.

The pictures released by the European Space Agency were taken by its Rosetta probe, which is nearing the final stage of its decade-long mission to drop a lander on comet 67P/Churyumov-Gerasimenko.

“Some people have already likened the shape to a duck, with a distinct body and head,” the European Space Agency said. Mission scientist Matt Taylor had a different comparison: “a strange-looking potato.”

“It’s certainly an exciting surprise,” said Taylor. Until now 67P was believed to have a more compact, rounded form.

One explanation is that the comet is a so-called contact binary composed of two parts, indicating that 67P either broke apart or fused with another comet at some point. Another is that it’s one unit deformed by its passage past Jupiter or the sun, said Taylor.

Because the pictures were shot when Rosetta was 12,000 kilometers (7457 miles) from the comet — about the distance between New York and Johannesburg — the unusual shape could also result from a digital processing method that was used to smoothen the image, he cautioned.

“We’re looking forward to the next month when this body comes into closer resolution,” Taylor said, adding that for the time being scientists aren’t making any changes to the probe’s flight path.

Rosetta is scheduled to come within 100 kilometers (62 miles) of the comet Aug. 6. It will observe the comet for several months before attempting to drop a lander onto its icy surface in November.

67P is about four kilometers (2 ½ miles) long and orbits the Sun every six-and-a-half years.