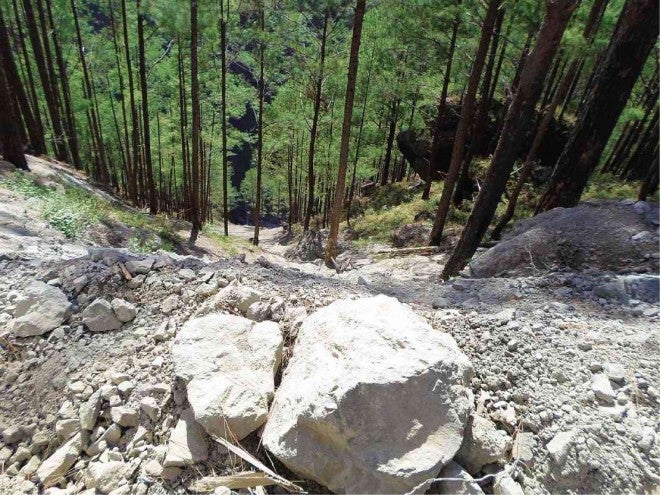 DEBRIS allegedly from the site of a hydroelectric plant being built in
Mt. Province has damaged tree lines and contaminated the Chico River. CONTRIBUTED PHOTO

But while Hydroelectric Power Corp. (Hedcor) has been fined P50,000 for the violations, the EMB said they did not merit the cancellation of the firm’s 2011 environmental permit for a hydroelectric power project in Sabangan town.

Juniper Dominguez, a Sabangan resident, filed the nullification case on behalf of the community in May, citing the cutting of trees and  siltation of waterways leading to the Chico River due allegedly to earth-moving activities for Hedcor’s 14-megawatt run-off river hydroelectric facility in the villages of Napua and Namatec.

“The violations do not merit a cancellation of the ECC. It can still be mitigated,” said Nestor Donaal, chief of EMB’s environmental impact assessment division in the Cordillera.

Gilbert Patacsil, an engineer and Hedcor liaison manager, said the firm was addressing the issues that were raised in Sabangan during a July 8 energy forum held in Bontoc, the Mt. Province capital.

Donaal said the EMB had directed Hedcor to pay P50,000 for two violations in a June 27 resolution.

The resolution concluded that “the project had no proper disposal area during the road piloting,” violating an ECC condition that the firm should build “an engineered earth dump” to contain loosened or excavated soil.

The resolution said the proponent “had admitted that some amount of residual materials rolled off the mountain slopes because of the rocky and steep slopes.”

Donaal said the Provincial Environment and Natural Resources Office of Mt. Province was expected to conduct an environmental impact assessment of the hydroelectric facility site.

“Even if Hedcor already paid the fines, it does not end there. The proponent needs to implement the mitigation measures to address the said violations,” he said.

Hedcor has committed to build an engineered dump site and gabion, or protection wall, along road slopes and gullies around the work site, he said.

Hedcor has been given until Aug. 15 to put up these measures to stop the contamination of the Chico River. Kimberlie Quitasol, Inquirer Northern Luzon