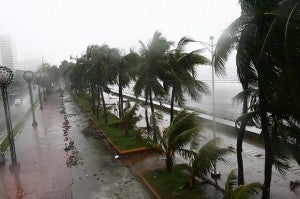 NDRRMC Chief Undersecretary Alexander Pama said that it should be a lesson a typhoon is always a dangerous, and fatal, occurrence.

“It’s a lesson that when a typhoon has strong winds, it’s always dangerous,” Pama said.

Typhoon Glenda reached tops of 150 kilometers per hour and gusts of 185 kph during its rampage in the country.

Calabarzon registered the most fatalities with 22.

Pama claimed that the NDRMMC should not be blamed for the deaths because it did not have shortcomings with its advisories and preparations.

“We did not lack in our advisories, our preparations, we were conducting briefings,” Pama said. “It’s just that they were, sadly, in the most dangerous areas.”

Of the 38 who died, 19 died after getting hit by debris like trees, dilapidated roofs or walls, and electric posts.

Also, two died of drowning in Quezon and Occidental Mindoro, one died in a landslide in Batangas, one died of a heart attack while getting rescued in Marinduque.

Of the 10 who were wounded, five were from NCR, two each from Bicol and Ilocos, and one from Central Luzon.

Calabarzon and Bicol recorded six people missing, while Mimaropa and Western Visayas registered one each.

After the typhoon, Pama said that the main aspect in preparation for oncoming disasters is information dissemination.

“We should always give an effort in giving out information,” Pama said. “It’s for the education of the people.”

In its report, the NDRRMC added that a total of 1,193 passengers are still stranded in ports together with 23 vessels, 176 rolling cargoes, and 15 motor boats.

Pama said the typhoon destroyed more than 7,000 houses and damaged more than 19,000. About $1 million in infrastructure was destroyed and at least $14 million in crops and livestock were lost, he said.

Mayor Cherilie Mella Sampal of Polangui town in Albay, one of the hardest hit provinces southeast of Manila, said 10,000 of her 80,000 constituents, abandoned their homes before the typhoon, many worried after witnessing Haiyan’s deadly aftermath in the central Philippines last November.

At least 6,300 people died and more than 1,000 were left missing from super typhoon “Yolanda” (international name: Haiyan), one of the most ferocious typhoons to hit land.

Although “Glenda” slightly weakened as it scythed across the country’s main northern Luzon Island, it may strengthen over the South China Sea before reaching either Vietnam or southern China, according to government forecasters.

Albay, Camarines Sur, and Naga City are still under state of calamity.