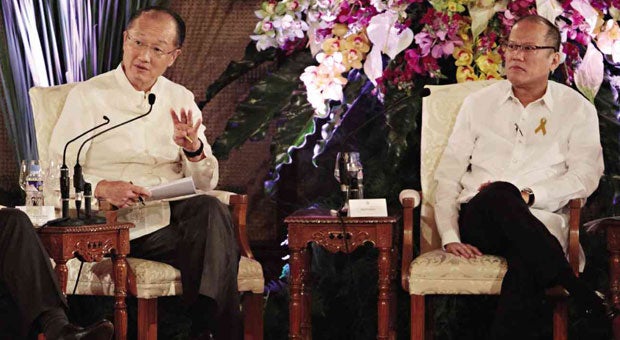 COMFORTER IN CHIEF World Bank president Jim Yong Kim fields questions from the media during the Daylight Dialogue in the Palace while the embattled President listens during the “The Good Governance Challenge” session. Kim says the Philippines “is a global model in fighting corruption,” according to Agence France-Presse. GRIG MONTEGRANDE

MANILA, Philippines–President Aquino on Tuesday received profuse praise from visiting World Bank president Jim Yong Kim, who declared that the Philippines would be the next Asian “miracle.”

Kim, who was in Manila for a two-day visit, also announced that the World Bank was providing $119 million for the construction of new roads, bridges and irrigation systems in Muslim Mindanao in support of efforts to promote peace and economic development in the region.

During the open forum at the Daylight Dialogue in Malacañang, Kim recalled that the World Bank had downgraded its “overall global [economic] growth forecast from 3.2 percent to 2.8 percent.”

But the World Bank did not do so for the Philippine economy, where the forecast remained “around 6.4 percent with a lot of upside going into the future.

“So I will just say again maintain these reforms, continue on the path that you’re on, and I think the future is very bright for the Philippines,” Kim said.

Kim later offered a toast during a luncheon in the Palace, saying to President Aquino that “each of those things you’re doing are not only the right thing to do but they’re laying the foundations for your economic growth in the future.”

“And we are absolutely certain that the impact of your administration will be felt far beyond the six years that you have as President,” Kim said.

He said President Aquino should take much of the credit for the Philippine turnaround.

“Can the Philippines be the next Asian miracle? [After] coming here, I think there is no question that is the case,” Kim said.

Kim heaped praise on Aquino’s antigraft campaign, which has seen the President’s predecessor and three sitting senators charged with corruption, as well as the impeachment of a Chief Justice.

“Among the most important things you can do is tackle corruption and . . . that is one of the things that the [Aquino] government is doing frankly better than any government in the world,” Kim said.

“Around the world, the spread of information technology is converging with grassroots movements for transparency, accountability and citizen empowerment,” he said.

Under Aquino’s leadership, he said, “the Philippines is absolutely at the forefront of this transformation.”

Kim said the Philippines, where one quarter of the roughly 100 million people live in deep poverty, had huge potential.

Kim’s strong endorsement was a timely boost for Aquino, with two polls released this week showing the President’s public support dropping to record lows amid deep controversy over an economic stimulus program.

The Supreme Court on July 1 ruled the Disbursement Acceleration Program (DAP) was unconstitutional, with 13 justices handing down a unanimous decision that Aquino should not have bypassed Congress in spending P167 billion.

Aquino on Monday said the government would appeal the Supreme Court ruling.

Muslim Mindanao remains one of the poorest regions in the Philippines, with development held back by four decades of conflict between separatist rebels and government forces.

“We’ll support the peace process in conflict-affected areas,” said Kim, who is here for a two-day visit.

Kim noted that the poverty rate in conflict-affected areas in Mindanao was at 50 percent, or more than twice the national average.

The fresh World Bank financing is part of the Philippine Rural Development Project (PRDP) that Kim himself announced this week during a visit to Leyte province.

Under the PRDP, the government would receive $508 million in concessional loans from the World Bank to raise rural incomes across the country.

The PRDP will be presented to the World Bank’s board of executive directors next month.

On top of the new aid, the International Finance Corp. (IFC), the World Bank’s private investment arm, is also working on projects that will generate 6,000 new jobs in Mindanao.

Kim said the bank remained confident of the Philippines’ prospects, citing robust investments by the Aquino administration in areas such as education and healthcare over the last four years.

“Spending on health and education has doubled. This is extremely important,” Kim said, noting that the full impact of the investments would continue to be felt for decades to come.–With a report from AFP