What kind of drawings sent Korean soldier into a rampage? 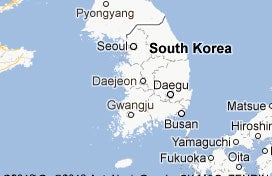 SEOUL, South Korea — Military investigators say a South Korean soldier involved in a deadly shooting spree has testified that he opened fire on colleagues after seeing their drawings depicting him as SpongeBob SquarePants.

The soldier, surnamed Yim, was arrested last month after allegedly killing five soldiers and wounding seven others at their army unit near the border with North Korea.

Brig. Gen. Seon Jong-chul told reporters Tuesday that Yim testified that he went on the rampage after finding the drawings, which he believed mocked him, on the back of his unit’s border patrol log.

Seon says Yim told investigators he had suffered lots of stress because of the drawings.