Aquino: Past presidents had own version of DAP | Inquirer News
Close
menu
search

Aquino: Past presidents had own version of DAP 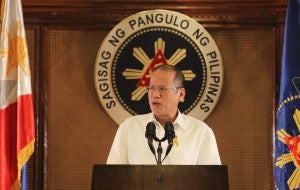 MANILA, Philippines – President Benigno Aquino III on Tuesday claimed that he did nothing different from his predecessors when his administration crafted the Disbursement Acceleration Program.

“My predecessors all had their versions of DAP, called the Reserve Control Account and alternatively Overall Savings, which were used, in part, to respond to the Asian Financial Crisis, and the Fiscal Crisis,” Aquino said during his keynote address on the Daylight Dialogue forum in Malacañang.

Addressing hundreds of businessmen and government officials, the President said those before him also “exercised the authority to transfer appropriations or savings to other branches of government and even to Constitutional Commissions.”

“Perhaps we are being questioned today simply because we have been truly transparent about it,” he said.

Aquino insisted that the DAP, despite being declared partly unconstitutional by the Supreme Court, was “perfectly legal” based on the Administrative Code.

Quoting the late President Ramon Magsaysay and alluding to the decision, Aquino said, “Those who have less in life should have more in law.”

He said Magsaysay also believed in the need for “healthy impatience.”

“It is not enough that we act. The duty of government is to act and to do what is right—to do what benefits the vast majority of people at the soonest possible time,” Aquino said.

The President, during his televised speech on Monday, said that the DAP was his administration’s answer to slow utilization of government funds.

He reiterated this during the Daylight Dialogue, saying, “I am told that for every peso we spend on infrastructure, another peso of output is generated in other sectors. Imagine the billions of pesos in infrastructure went unspent.

“The Philippines is a country with limited resources, and we needed to ensure that all our resources were being maximized to serve the people,” he added.

Aquino emphasized that the delayed implementation of programs is a disservice to the people.

Escudero, Poe on Aquino’s defense of DAP: The law is the law