Enrile opposes move to amend graft raps filed against him 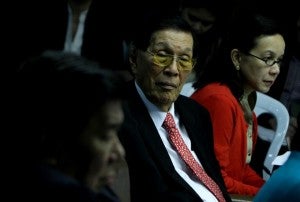 MANILA, Philippines — Senator Juan Ponce Enrile on Monday opposed the prosecutor’s move to amend his graft charge, saying the amendment changes the theory of the case.

In an opposition filed before the Sandiganbayan on Monday, Enrile said the amendments should mean the court’s determination of probable cause to hold him on trial be withdrawn because it was based on the original information.

“The amendments sought… substantially changes the charges against Enrile… and the defense Enrile will take,” the opposition read.

Enrile said should the charge be amended to show he directly endorsed Napoles’ non-government organization, Enrile would be denied his right to be properly informed of the allegations against him.

He added that changing Subaro to Saro is substantial because if effectively changes the nature of Enrile’s transactions for the release of his pork barrel funds.

The prosecutors moved to change Subaro to Saro after Budget Undersecretary Mario Relampagos, a co-accused in graft, said he did not sign any Subaros.

Saros are budget release documents issued by the budget department, but Subaros are those issued by other line agencies.

With the new changes, Enrile should be given a chance to defend himself on the new charges “otherwise Enrile will be denied of his day in court.”

The Ombudsman and the Sandiganbayan should also make another determination of probable cause that would be based on the amended charge, should it be allowed, the opposition read.

“It bears stressing that the amendment of information should not be dependent on the whims of the prosecution,” the opposition said.

“The effect of such amendment on the accused and more importantly on the entire proceedings of the cases should be the more important consideration,” it added.

Enrile faces 15 counts of graft and one count of plunder over the pork barrel scam.