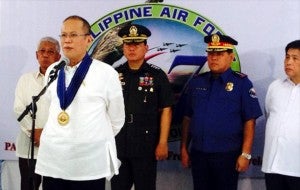 “It’s hard to define good intentions because each has its own perception of it. For example, you steal in order to keep from getting hungry. That’s not correct. You beat the red light because you were in a hurry for a meeting. That won’t do,” former Budget Secretary Benjamin Diokno said in an interview with Radyo Inquirer on Monday.

Parts of DAP were recently declared unconstitutional by the Supreme Court. The government claimed that the DAP was a move to boost economic growth. President Benigno Aquino III is expected to comment on the court’s decision Monday night.

“That is very clear. You are the President. You’re supposed to protect the Constitution so it’s a bad example,” Diokno said.

“It was clear that the decision was unanimous and as the President you’re supposed to follow the law,” he added.

Aquino also rejected Budget Secretary Florencio Abad’s resignation last week, saying that accepting it “is to assign him to a wrong.”

“I cannot accept the notion that doing right by our people is a wrong,” Aquino said.

The President’s popularity ratings also plunged at an all-time low because of the issue.

“It is on the discretion of the President whether to accept it or not. But if I were Abad, since I am becoming a burden to President, I will resign irrevocably. The budget season is here and he will be at the House of Representatives to defend the 2105 budget,” Diokno said.

“Pagpe-pyestahan s’ya du’n (Abad). Araw-araw ‘yan (They will devour him there every day). You don’t need that kind of aggravation going to the final two years of your term,” he said.

Diokno said he believes that the issue would not end with Abad’s resignation.

“But at least it will no longer be Abad who will face the Congress. It will not end there but he will have to face a case in the Ombudsman but not necessarily plunder. That is hard to prove because it would have to be proved that he gained something. He will face malversation of charges,” Diokno said.

In good faith, my foot!