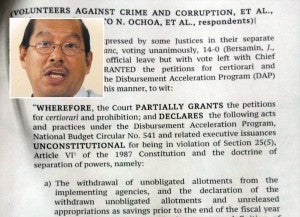 The President, at the start of the Cabinet budget presentation aired over government TV station Friday morning, said Abad tendered his resignation Thursday, but decided not to accept it.

“Let me explain why. The notion in the current atmosphere is DAP was bad for our people. Even our most vociferous critics grant the DAP has benefited our people,” he said.

“To accept his resignation is to assign to him a wrong. And I can’t accept the notion that doing right by our people is a wrong,” he added.

It was the first time the President issued a statement since the Supreme Court struck down the presidential budgetary prerogative Tuesday last week.

It declared unconstitutional the circular allowing the release of savings from the Executive Department to agencies and projects outside the national budget approved by Congress.

The other day, presidential spokesperson Edwin Lacierda said the Executive Department disagreed with the high court ruling which, in effect, imputed criminal liability to the “good men and women” in the bureaucracy.

He said the ruling in effect imputed criminal liability to the “good men and women” in the bureaucracy. With a report from INQUIRER.net

Abad may face nation after Sona