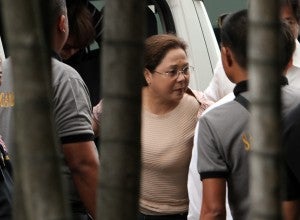 The Sandiganbayan is requiring the doctors of lawyer Jessica Lucila “Gigi” Reyes to explain why she had been moved to the Philippine Heart Center (PHC) pending the resolution of her motion to be allowed to be confined in a tertiary hospital.

Dennis Pulma, the clerk of court of the Sandiganbayan Third Division, on Saturday said Reyes’ attending physicians would have to submit a report to the court on Monday explaining the circumstances of her sudden transfer to Heart Center from the Taguig-Pateros District Hospital on Friday night.

Reyes, former chief of staff of Senate Minority Leader Juan Ponce Enrile, who is being held in a police hospital at Camp Crame, had been confined at the public hospital after she allegedly experienced “panic attack” moments after she was transferred to the police jail in Camp Bagong Diwa in Bicutan, Taguig City, on Tuesday.

She spent her first few days as a jailbird at the temporary detention cell of the Sandiganbayan after she turned herself in to the court on July 4 on plunder and graft charges brought against her and 53 others, including Enrile and Senators Bong Revilla and Jinggoy Estrada, over the P10-billion pork barrel scam.

On Friday night, Reyes was rushed to the PHC after she complained of chest pain and difficulty in breathing.

She was taken to Heart Center in an ambulance at 8 p.m., arriving there an hour later.

Pulma said the warden of the female dormitory at Camp Bagong Diwa, which is run by the Bureau of Jail Management and Penology (BJMP), would also have to explain in writing why Reyes was taken to Heart Center.

“[The transfer of Reyes to Heart Center] was a judgment call of her doctors,” Pulma told the Inquirer in a telephone interview.

“But the doctors and the jail warden have to state to the court why Reyes ended up being confined at the Philippine Heart Center. The last information the court had was that Reyes was confined at the Taguig-Pateros District Hospital,” he added.

“They have to make an explanation or submit a report, since the court has not acted on their urgent motion,” he said.

Pulma noted that Reyes’ lawyers had petitioned the Sandiganbayan for her detention at the Philippine National Police Custodial Center at Camp Crame.

But the court threw out Reyes’ motion and instead sent her to the police jail in Camp Bagong Diwa.

Her lawyers claimed that Reyes became anxious upon learning that she would be spending time behind bars with nine suspected female members of the communist New People’s Army (NPA).

Pulma said the Sandiganbayan Third Division, chaired by Presiding Justice Amparo Cabotaje-Tang, had already summoned the doctors who attended to Reyes at the Taguig-Pateros District Hospital to appear before it on Tuesday for the hearing of her urgent motion for her transfer to a tertiary hospital.

Asked if her doctors may be cited in contempt for moving her to another hospital, Pulma said: “I’m not in a position to say if it’s contemptuous or not because the court has yet to act on their motion.”

“The motion is still being heard by the court. I’m not in a position to even speculate on what may happen,” he said.

Villaester said he did not know the doctors’ findings, but a medical bulletin issued by the Taguig-Pateros District Hospital at 7 p.m. on Friday said Reyes complained of “persistent chest pain” and she had difficulty breathing.

The bulletin said Reyes was given antianginal drugs to stabilize oxygen delivery to her heart, but it gave her “no relief.”

The “chest heaviness, chest pain and difficulty of breathing” Reyes complained of “might [have been] symptoms of a more serious problem [that] could not be seen by ECG tracing,” Sta. Lucia said.

“Immediate further investigation and procedures or workups [needed to be] done to prevent catastrophic complications,” he said, adding that his hospital did not have the equipment for those tests.

But Heart Center has the needed equipment and Reyes could be taken there for immediate examination to see if she really had cardiac problems that required immediate intervention, he said.

“It was a fast decision and it hastened the transfer, because her cardiologist was considering cardiac emergency,” he said.

Villaester said a detainee needed to seek permission from the court before making any move. But “last night, there was an urgency,” he said.

“It was the doctors’ call. [In] emergency cases, we need to follow the doctors. We are talking about a person’s health here,” he said.

Villaester said Reyes was confined in an ordinary but air-conditioned room at Heart Center. There was a television in the room, but it was turned off, he said.

“There are BJMP personnel detailed there so they can keep watch over her,” he said.

Villaester denied that the BJMP was giving special treatment to Reyes, as critics of her transfer to Heart Center claimed on Saturday.

Militant groups staged a brief protest in front of the hospital. They carried placards that compared the BJMP’s treatment of Reyes with its handling of the case of communist rebel Andrea Rosal, who was pregnant when captured. Rosal’s baby died, and leftist groups blamed it on the lack of medical attention given to the daughter of the late spokesperson of the NPA, Gregorio Rosal.

“We don’t have preferences. We do this for all inmates in the country,” he said.

“As a matter of fact, Reyes’ cell mate was also taken to the Taguig-Pateros District Hospital due to pregnancy bleeding. She’s an ordinary inmate but we [took her to the hospital] because it was an emergency,” he said.

He did not identify the ordinary inmate.

Villaester said the hospital had not yet released a medical bulletin so he could not say what was ailing Reyes or how long she had to stay there.

“As of now it’s only observation and monitoring. There are a lot of wires connected to her body,” he said. “She’s asleep most of the time.”

Reyes’ mother, brother and sister were in the room watching her, he said.

Villaester said Reyes was paying for her hospital expenses. With reports from Kristine Felisse Mangunay and Erika Sauler