‘I can’t accept that doing right by our people is wrong’
By: Arlyn dela Cruz, TJ Burgonio - @inquirerdotnet
Philippine Daily Inquirer / 02:20 AM July 12, 2014 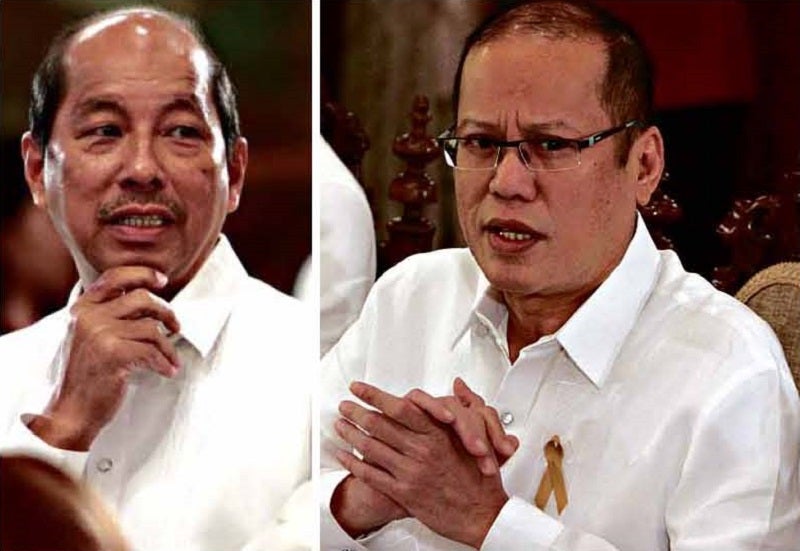 THE EMBATTLED AND THE TRUE BELIEVER Budget Secretary Florencio “Butch” Abad (left) gets to keep his post after President Aquino rejected his offer to resign.  GRIG C. MONTEGRANDE

President Benigno Aquino III used his Cabinet meeting on Friday to declare that he is standing by Budget Secretary Florencio Abad and is rejecting his offer of resignation on Thursday.

Mr. Aquino briefly explained his reason for keeping Abad in the Cabinet and defended him.

“The notion in the current atmosphere is that the DAP was bad for our people. Even our most vociferous critics grant the DAP has benefited our people,” he said.

Abad’s resignation letter to the President was seen as a move to save the administration from growing criticism over the Disbursement Acceleration Program (DAP), a budgetary invention of Abad to impound hundreds of billions of pesos of government funds and distribute them to lawmakers and recipients and projects of Malacañang’s choosing.

The embattled Abad has found a provision in the Constitution that apparently escaped the scrutiny of the learned justices of the Supreme Court in justifying his brainchild, the DAP, which the high court last week ruled unconstitutional.

The provision he cited is Article VI Section 25 (5) of the 1987 Constitution giving authority to the President to augment appropriations using savings referred initially as “Reserve Control Account (RCA).”

Abad claimed that all post-Edsa presidencies had employed various mechanisms like the DAP to use savings and unprogrammed funds, the first of which was the RCA first used by the administration of President Corazon Aquino.

Abad’s explanation is contained in a two-page letter, with documents and attachments, explaining the DAP, which he sent to this reporter and broadcast journalist Jake Maderazo on July 2. [Reporter De la Cruz and Maderazo are cohosts of a morning program called “Banner Story” on Inquirer Radio 990khz.–Ed.)

In the letter, Abad described the DAP as a “reform intervention to accelerate public spending and boost the economy” and a measure that was adopted to address the delay in the implementation of priority projects and inefficient disbursement of budget funds.

Abad said that through the DAP, programs and projects worth P140.8 billion were implemented from 2011 to 2013.

The DAP as a reform intervention had served its purpose “as a fiscal stimulus measure” and was thus recommended for termination in a memorandum to President Aquino on Dec. 28, 2013, sent by Abad and the other members of the government’s economic team—Finance Secretary Cesar Purisima and Socioeconomic Planning Secretary Arsenio Balisacan, the letter said.

In the memorandum to the President, Abad, Purisima and Balisacan said the DAP had “achieved its objective as a fiscal stimulus measure.”

All presidents did it

The DAP was uncovered through a privilege speech by Sen. Jinggoy Estrada in September 2013.

In his July 2 letter to this reporter, Abad said all post-Edsa presidencies had a scheme to use savings and unprogrammed funds using various mechanisms.

He said the RCA was first introduced during the administration of President Corazon Aquino in 1989 through Administrative Order No. 137 entitled “Directing the Adoption of Economy Measures and the Imposition of Budget Reserves for Fiscal Year 1989 for Purposes of Generating Additional Funds for the Implementation of the Salary Standardization Plan and Other Priority Programs.”

He claimed the same mechanism to use budget savings was also followed by the administrations of President Fidel Ramos and President Joseph Ejercito Estrada, citing “economic difficulties brought about by the peso depreciation” and “erosion of targeted surplus and shortfall in revenues.”

During the administration of President Gloria Macapagal-Arroyo, the RCA was replaced with the term “Overall Savings” and was also used as a mechanism to augment priority programs using savings to include unreleased appropriations and unobligated allotments, Abad claimed.

Abad said the DAP was recommended for termination in December 2013 not because of the controversy it generated after the Estrada expose but because it had served its purpose.

In claiming “good faith” in the creation of the DAP, Abad said the reform intervention ushered in a “regime of transparency, efficiency and accountability” of public spending and cited even more reforms in the 2014 national budget.

The letter concludes with what may be considered a plea.

“I would be most grateful to you if you can share these with your peers and various networks so we can bring the budget closer to the Filipino people and ultimately empower them as our active partners in establishing good governance and sustainable economic growth,” Abad said.

Asked if he regretted creating the DAP, Abad replied in a text message: “I have no regrets creating DAP. You do not regret anything done to reform a system for better transparency, efficiency and accountability. On top of that, our [reforms expanded] the economy and [hugely] benefited our people.”