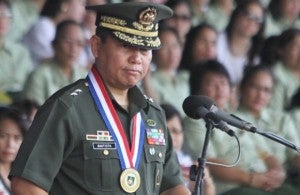 Instead of acting on the findings and recommendations of the regional headquarters, a Board of Inquiry (BOI) from the level of the General Headquarters (GHQ) at Camp Aguinaldo will make further re-investigation.

“I just received the BOI report and I am constituting a BOI from the level of the GHQ to look into this report and find out what we can do and the  appropriate actions that we need to take to address that issue,” Bautista told reporters on Friday.

On Thursday, the military revealed that based on the report of Western Mindanao Command, the six Army soldiers were killed by artillery round fired by the Marines and not the Abu Sayyaf.

The Marines fired 105-mm howitzer rounds to reinforce their men engaged with militants last June 19 but instead hit an Army detachment.

“Definitely we will address the issue. It’s an unfortunate incident, nobody wants that but it happens. As you all know even among the best armies in the world that occurs and lately we’ve seen that, even with the United States Army in Afghanistan,” Bautista said.

“And it’s [a] hazard that we face as members of the Armed Forces. What is being done is to be conscious about it and to learn from all these incidents so it does not happen. There is a very big effort to prevent that from happening and that’s the reason why we are constituting a board of inquiry at the level of GHQ to find out all of circumstances of all of these,” he added.

The AFP chief, who is also retiring next week, refused to comment on whether anyone would be held accountable, saying that he does not want to preempt the investigation.