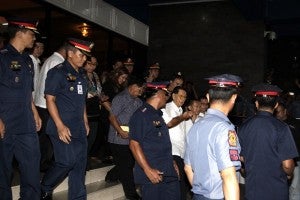 MANILA, Philippines—The Philippine National Police (PNP) said on Thursday that it does not recommend the transfer of Senator Juan Ponce Enrile to the PNP Custodial Center’s detention bungalow.

With Enrile’s health, Chief Superintendent Alejandro Advincula, PNP Health Service chief, said in a press briefing that ‎it is not advisable for him to be detained in the detention facility where Senators Bong Revilla and Jinggoy Estrada are currently held.

“If he would be transferred to a place na alam natin na hindi maganda for his age, that would trigger his complications on hypertension. His (blood) pressure would shoot up,” ‎Advincula said.

The nonagenarian senator, according to the police official, has an “uncontrolled hypertension.”

With such condition, he said Enrile is vulnerable to stroke.

“We don’t want to reach that situation so the reason why he’s admitted to the hospital is to avoid such complication,” he explained.

When asked if there’s a risk for the patient to die with his current condition, Advincula said: “Totoo ‘yan (that’s true).”

When Enrile turned himself in to the police on July 4, police doctors immediately ‎recommended his admission to the PNP General Hospital (PNP GH) due to his high blood pressure that shot up to 200 over 90.

The medical exam was made in compliance with the order of the Sandiganbayan Third Division to produce a recommendation report on whether Enrile needs to stay at PNP GH or not.

For the meantime, Enrile was allowed by the court to be detained at the Camp Crame hospital.

The eight-man medical team was composed of doctors of different specializations including an ophthalmologist, neurologist, geriatric medicine specialist, cardiologist and an endocrinologist.

It was led by Dr. Lourdes Capito, Deputy Medical Director of the state-run hospital.

Advincula said the PGH has recommended the PNP hospital to acquire a Holter monitoring machine to monitor for 24 hours irregularities on Enrile’s heartbeat.

He said it would be installed on Thursday ‎afternoon by a technician from PGH.

Aside from chronic hypertension, doctors found that Enrile had “episodes of weakness”.

The PNP said results of the senator’s medical exam might be released ‎on Friday.

PNP defended on decision to confine Enrile in hospital