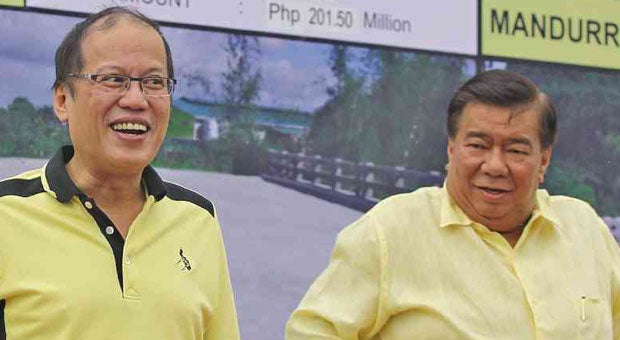 PRESIDENT Aquino and Senate President Franklin Drilon announce the completion of several projects for Iloilo province during a visit in Iloilo City on June 27. MALACAÑANG PHOTO

ILOILO CITY—The province of Iloilo, which received P100 million in Disbursement Acceleration Program (DAP) funds to build a convention center, is in need of at least P27 billion for programs to revive its economy and help its people back on their feet following the destruction left by Supertyphoon “Yolanda.”

In a rehabilitation and recovery plan submitted by Gov. Arthur Defensor to the office of rehabilitation czar Panfilo Lacson, the provincial government said it needs P12.9 billion to build new homes and communities for people displaced by the monster storm.

The province is a recipient of P100 million in DAP funds endorsed by the office of Senate President Franklin Drilon for the construction of a convention center that Drilon said the province needs to spur economic growth.

The rehabilitation and recovery plan submitted by Defensor covers projects and programs that would be implemented by line agencies of the national government like the departments of education and health and agencies involved in housing and livelihood programs.

Jerry Bionat, executive officer of the provincial disaster risk reduction and management office, said the amount includes funds needed to help 30 towns and Passi City, which suffered varying degrees of damage as a result of Yolanda.

Yolanda, which struck on Nov. 8 last year packing winds reaching 300 kilometers per hour, destroyed 86,004 houses and damaged 87,064 others in the province. It left 196 people dead and 14 others missing.

These towns account for 80 percent of the province’s total fish production.

Thousands of fishing boats were destroyed but many of the victims had received new fishing boats and gear mostly from local and international private donors.

An oil spill also contaminated the coastline of Estancia and polluted neighboring municipalities after a power barge of the National Power Corp. slammed into the town’s coastline at the height of Yolanda.

Bionat said under the plan submitted to Lacson, victims who lost their homes would receive P30,000 worth of shelter materials each, while those with damaged houses will be given P10,000 each. These exclude people who had already been resettled.

Iloilo is among the local government units that have not received bulk of rehabilitation and recovery funds from the national government.

Lacson had said the reason for the delay in the release of funds is the failure of local government units, mostly in Western Visayas, to submit recovery and rehabilitation plans.

But local government units and disaster risk reduction and management offices in the region said they had submitted the plans in December last year but were required to submit another report using a different template from Lacson’s office early this year.