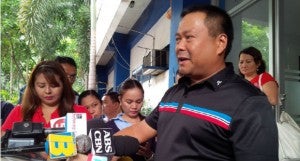 MANILA, Philippines – Senator Joseph  Victor “JV”  Ejercito  said he would return  the P10 million Disbursement Acceleration Program (DAP) funds that he received when he was congressman  if the court would compel him and other recipients to do so.

Ejercito though insisted the liability over the DAP funds recently declared unconstitutional by the Supreme Court should fall on the Executive since its creation did not pass through the approval of Congress.

“But if the courts will tell us to return through cash then we will have no choice but to follow since DAP is unconstitutional and illegal,” he said in a television interview.

And “if the Aquino administration is stern in its thrust for good governance,” the senator said, it should also release to the public the list of other DAP recipients.

“This is a good opportunity to show that they are really serious in their thrust for good governance,” Ejercito said.

The senator admitted receiving additional P10-million funds in 2013 on top of his annual allocation as congressman.

But he said he was not aware where the money was sourced from, saying he just assumed that it came from the savings of Congress.

Ejercito also made it clear that the DAP funds he received were only used for projects under the National Dairy Authority and the Technology and Livelihood Resource Center (TLRC).

The funds, he said, were delivered in the form of milk and dairy products for the school children in San Juan and trainings.

Will Jinggoy Estrada’s imprisonment finally end his feud with JV?