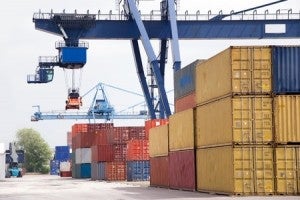 MANILA, Philippines—The Department of Trade and Industry expects the flow of goods in and out of the Manila port to start easing within the next several weeks, following the issuance of a reminder to importers to clear the over 7,000 containers stranded at the port.

“The DTI is involved in a government committee that develops plans in decongesting the ports in the city of Manila. Now that traffic of delivery trucks and vans in Manila City is easing, it is essential that the transport of products to and from the ports and their distributors is fast and frequent to decongest the ports and to provide supplies in the markets for consumers’ purchases,” Trade Undersecretary Victorio Mario A. Dimagiba said in a statement issued Tuesday.

According to Dimagiba, they have started prompting importers to immediately get their loaded containers as soon as these are cleared by the Bureau of Customs. DTI has likewise urged industries, as well as warehouse owners and operators to cooperate and ensure that their businesses are open at night and during weekends to accept deliveries, according to Dimagiba.

Dimagiba explained that the truck congestion has been addressed and the DTI could now address the container pile-up at the Manila port.

He stressed that the truck ban policy being implemented in Manila — which has caused the truck congestion at the port — should no longer be a concern given the so-called 24/7 express lane for containerized trailer trucks. This lane runs through the innermost north and southbound lanes of Roxas Boulevard all the way to Anda Circle, as well as the outermost north and south­bound lanes from Anda Circle up to R­10.

“We anticipate for the flow of goods in the market to normalize in several weeks as truckers manage their deliveries with industries through the express trade lane; and as container owners and operators bring the products out the ports,” Dimagiba added.

For the empty freight containers, there have been talks of transferring them to the Subic freeport, Ruperto Bayocot, president of Confederation of Truckers Association of the Philippines, said in an interview on Monday.

Bayocot, however, said this proposal, which was reportedly being mulled by the PPA and ICTSI, would only further hike hauling rates and shipping charges.

Under the truck ban policy, the eight-wheelers and vehicles with a gross weight of above 4,500 kilograms are banned from plying Manila’s streets between 5 a.m. and 9 p.m., starting February this year. A temporary concession was offered by the city government allowing trucks to ply its streets between 10 a.m. and 5 p.m. within a six-month period. This, however, resulted in a congestion that has led to higher hauling rates and shipping charges, a container pileup at the Manila ports, delays in shipment deliveries, higher costs of goods, among others.