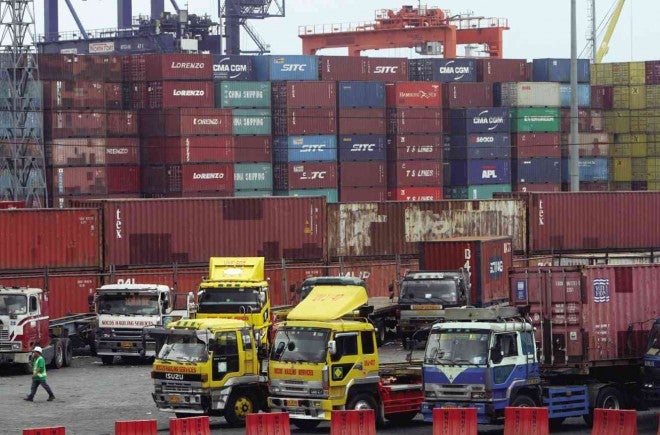 Consumers and businesses could feel within three months the full repercussions of the truck ban in Manila and the implementation of an order raising fines for colorum or unauthorized trucks, the head of the Confederation of Truckers Association of the Philippines said on Monday. INQUIRER FILE PHOTO

MANILA, Philippines–Consumers and businesses could feel within three months the full repercussions of the truck ban in Manila and the implementation of an order raising fines for colorum or unauthorized trucks, the head of the Confederation of Truckers Association of the Philippines (CTAP) said on Monday.

CTAP president Ruperto Bayocot said the two measures would further raise the prices of consumer goods, make it harder for importers to secure their raw materials, and increase the rates of both shipping lines and trucking companies.

“This could be damaging to our country,” Bayocot said in an interview. “There are shipping companies that are no longer keen on making deliveries here, while others are skipping the Philippines because it usually takes them a week to unload, so it derails their schedules.”

“These developments will have a huge impact on our economy and three months from now we will start to feel increases in the prices of goods, hauling rates and shipping charges,” he added.

As it is, the congestion at the Port of Manila has prompted many truckers to raise hauling rates. In the case of CTAP, Bayocot said the group had issued guidelines under which member companies were told not to raise their hauling rates by more than 50 percent.

This amount will have to be paid on top of existing freight charges,

The truck congestion and container pile up at the Manila ports are being blamed on the truck ban, which bars eight-wheelers and vehicles with a gross weight of more than 4,500 kilos from plying Manila’s streets between 5 a.m. and 9 p.m., starting February this year. A temporary concession was offered by the city government allowing trucks to ply its streets between 10 a.m. and 5 p.m. within a six-month period.

The Port of Manila remains the main gateway for most of the major companies operating in Luzon, including the Calabarzon-based exporters, which tap the port for their shipments, whether imported raw materials or finished goods for export.

There is a proposal from the Philippine Ports Authority and International Container Terminal Services Inc. (ICTSI) for truckers to return the empty containers to Subic instead of Manila, to ease the container pileup at the port. This, however, will entail higher charges on the part of the importers and eventually the consumers, Bayocot added.

The implementation of higher fines on colorum trucks, as ordered June 2 by the Department of Transportation and Communications (DOTC), is also expected to further aggravate the problem.

Bayocot said the one-month moratorium, recently granted to allow trucking companies to comply with the requirements, may not be enough.

Reached for comment, a spokesperson for the Manila city government defended the truck ban and disputed Bayocot’s warnings by citing earlier Malacañang statements in support of the traffic measure.

“Secretary Jose Almendras has already explained that. He had studied the effects of the ban on the economy and concluded that there is a logistics problem. The contention of the truckers is not true,” said information office chief Diego Cagahastian.

Cagahastian argued that the truck ban could not be cited as the sole reason behind price increases. He also noted that the city—led by former President and now Mayor Joseph Estrada—had already given concessions to truckers by giving them a so-called window period and designating a lane on Roxas Boulevard which they can use 24/7.