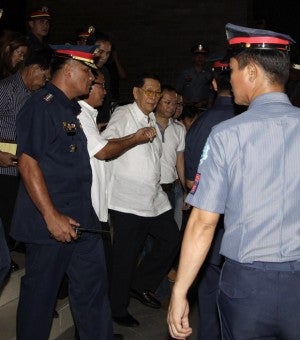 Senator Juan Ponce Enrile at Camp Crame on the way to the PNP Hospital. The Sandiganbayan has ordered Enrile’s arrest in connection with the plunder and graft cases filed by the Ombudsman. INQUIRER FILE PHOTO/ LEO SABANGAN

MANILA, Philippines—For the Office of the Special Prosecutor, Senator Juan Ponce Enrile need not be under hospital arrest for his plunder case because the 90-year-old lawmaker seemed healthier after his stem cell treatment.

During a hearing at the Sandiganbayan on Tuesday, prosecutor Annielyn Cabelis said Enrile’s motion for him to be detained at the Philippine National Police (PNP) General Hospital is “unfounded and self-serving.”

Cabelis told the court that even with his age and various illnesses, Enrile is still performing quite well as senator.

“He’s undergone stem cell surgery, adding vigor to the accused. It’s not really precarious as what they told the court,” Cabelis said.

The justice then went on to ask the prosecutor if she feels her blood pressure going up when she is arguing with her husband.

When the prosecutor said “I don’t fight with my husband,” Martires pointed out that anxiety for persons facing a crime also affects their blood pressure.

“Do you know an anxiety of a person who has a case, especially a criminal case?… Do you know that the period of anxiety also affect blood pressure?” Martires told the prosecutor.

Enrile’s lawyer Estelito Mendoza said before the court that they just wanted to “preserve the life of Enrile given to him by the Almighty.”

“In my 85 years, I’ve had enough experience on health to know if there’s a problem,” the veteran lawyer, who has a hearing problem, said.

He added that a hospital detention would allow Enrile access to medical attention in case of emergency.

“His prescribed daily medicine numbers 19. In situation like there is a sudden attack, that can be immediately fatal. The only hope is if there is an immediate medical attention,” Mendoza said.

Also, according to a medical certificate from the Makati Medical Center and attached to the bail motion, Enrile is also under 22 maintenance medicines for his illnesses: 21 tablets and an injection.

In his motion for hospital arrest, Enrile cited his “advanced age and frail condition” that he be in the meantime detained in a hospital.

Enrile was charged with plunder and graft over the pork barrel scam. He surrendered to the police after an arrest warrant was issued.

While the commitment order from the court detailing his place of detention is pending, Enrile is in the PNP hospital due to hypertension and an abnormal heart murmur.