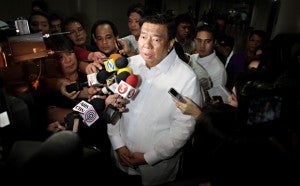 “It is important for the public to be aware of how every centavo of the DAP funds was spent, and to where it all went. Let our people see everything, and judge,” Drilon said in a statement.

“I have been an advocate of a transparent government. I believe that all projects which involve public funds should be disclosed to the public, and open to scrutiny anytime,” he said.

The Senate leader was reacting to presidential spokesman Edwin Lacierda’s call on lawmakers to disclose how they spent the allocation they received under the DAP.

But Drilon noted that as early as October last year, he already released to the public and media where the P100 million DAP funds he availed of had gone to.

He even furnished the media this Tuesday a copy of his one-page letter to Budget Secretary   Florencio Abad dated November 14, 2012 and a Special Allotment Release Order (SARO) pertaining to his P100 million fund request.

“We hereby request for the release of funds in the FY 2012 General Appropriations Act (R.A. 10155) in the amount of One Hundred Million Pesos for the construction of Iloilo Convention Center chargeable under the Department of Public Works and Highways,” Drilon said in the letter.

He said the construction of the center in Iloilo Business Park in Barangay (village) Airport, Mandurriao, Iloilo City was in line with the objective of the DAP “to boost growth” since the project will create more job opportunities, generate economic activities, promote tourism in the country, and pump-prime the economy.

On December 12, 2012, Drilon said a SARO A-12-01294 was issued to the Department of Public Works and Highways central office as the implementing agency to fund the construction of the project.

A SARO is a document that authorizes the agency to enter into an obligation or commitment, noted Drilon.

“The construction of Iloilo Convention Center is a dream of the Ilonggos and we are very thankful that the Aquino administration has made it a reality,” he added.