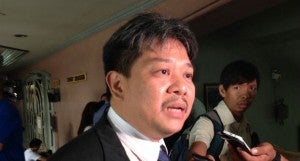 MANILA, Philippines — The lawyer of alleged pork barrel scam mastermind Janet Lim-Napoles said the prosecutors seemed to be delaying the bail hearing of Napoles as well as of Senator Jose “Jinggoy” Estrada before the Sandiganbayan.

This after prosecutors on Tuesday presented to the witness stand Atty. Vic Escalante Jr., a graft-investigating and prosecuting officer tasked with Estrada’s case under the Office of the Ombudsman.

The defendants questioned the prosecutors’ move to present a witness this early during the accused’s bail hearing motion ahead of a trial proper.

Escalante only managed to testify that he was authorized to conduct an investigation on Estrada’s pork barrel funds releases.

While Escalante was testifying, the prosecutor was marking the documents of evidence one by one.

They only reached the second document when Associate Justice Alexander Gesmundo said the bail hearing should be adjourned to enable the prosecutors to prepare the marking of the voluminous documents.

Gesmundo added that Tuesday’s hearing be included in the preliminary conference instead of a bail hearing.

For Napoles’ lawyer Stephen David, this is a delaying tactic to prolong the bail motions of Estrada and Napoles on plunder.

“The documents are voluminous… Their objective is to prolong the bail hearing,” David told reporters in Filipino after the hearing.

David also told the justices during the hearing that the witness’ testimony should be held at a trial proper instead of a bail hearing.

But Associate Justice Gesmundo said it is still under the rules for the court to hear the witnesses’ testimony to determine if Estrada and Napoles should be granted bail.

In an interview, David said the prosecutor should have instead talked about the information on the plunder case instead of marking the documents.

“The only question there is if Jinggoy received money from Napoles,” David said.

“If they’re going to mark each document one by one, it’s going to take long. Maybe they just have many documents that are not needed at this time,” Flaminiano said.

Another lawyer of Estrada, Alexis Suarez, said the bail hearing veered from being a summary procedure when the prosecutors proceeded to mark the evidence.

Suarez also said they are questioning the witness’ testimony because he does not have personal knowledge on the records to be presented.

“His testimony is hearsay because he is not a witness to the allegations,” she said.

The anti-graft court’s fifth division is hearing the motions of Estrada and Napoles for bail from plunder over the pork barrel scam.

Estrada and Napoles were present during the hearing but they refused interviews from the media.

Napoles as usual was accompanied by her police escorts, while Estrada was with his father former President and now Manila mayor Joseph Estrada, mother former senator Luisa “Loi” Estrada, and brother Jude. Noticeably absent was his wife Precy Ejercito.