Survey has only Binay rising among top officials | Inquirer News

Survey has only Binay rising among top officials 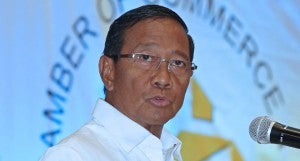 MANILA, Philippines–Among the top officials in the line of succession for the presidency, only Vice President Jejomar Binay scored a satisfaction rating in March higher than the rating he posted in December last year, according to the latest Social Weather Stations (SWS) survey.

The survey was conducted from March 27 to 30 and was first published in BusinessWorld.

In the 15 surveys since September 2010, Binay garnered eight “excellent” and seven “very good” ratings. His June 2013 rating of plus 76 was his best record, a level he first notched in August 2012.

The survey found 46 percent satisfied and 29 percent dissatisfied with the performance of Drilon, resulting in a net satisfaction rating of plus 17, down by eight points from December but still rated “moderate.”

The net satisfaction ratings of Belmonte and Sereno were downgraded from “moderate” to “neutral.”

Aquino’s net satisfaction rating in the first quarter, which was released earlier, also dropped from plus 49 in December to plus 45 in March, but was still considered “good.”

The performances of the top government institutions were also rated.

The net rating of the Cabinet as a whole remained unchanged at a “moderate” plus 20 (45 percent satisfied minus 25 percent dissatisfied).

The survey used face-to-face interviews of 1,200 adult respondents nationwide and had a margin of error of plus-or-minus 3 percentage points for national percentages.–Inquirer Research