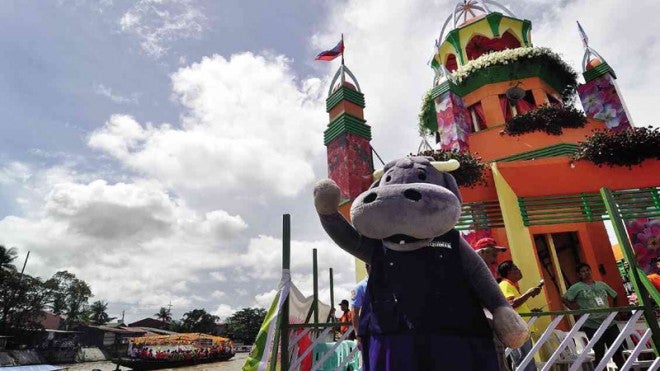 BACK AFTER 21 YEARS The Inquirer mascot Guyito rides on the three-story pagoda as it crosses the Bocaue River before the fluvial parade celebrating the Feast of the Mahal na Krus sa Wawa in Bocaue, Bulacan province. The event returns 21 years after a similar pagoda sank, killing 300 devotees. RICHARD A. REYES

BOCAUE, Bulacan—It was no ordinary fiesta in this riverside town in Bulacan province on Sunday.

Excitement was palpable as residents, many in their Sunday best, trooped to Bocaue River to relive—or maybe forget—a tragedy that has haunted the town since 1993.

Young and old, Bocaueños joined the festivities, which included a grand fluvial parade, to mark the annual Feast of the Mahal na Krus sa Wawa (Holy Cross of Wawa)—21 years after a festival pagoda sank in the river, killing about 300 devotees.

The organizers made sure that the tragedy on July 2, 1993, would not happen again.

As a precaution, the organizers required the more than 200 devotees who were allowed to board the pagoda on Sunday to wear life vests and register on a manifest.

“It was overloading that caused the accident [in 1993]. Now, we limit [the passengers to] only 250 devotees. We see to it the committee is led by competent leaders,” Msgr. Alberto Suatengco, Bocaue parish priest, earlier told the Inquirer.

Suatengco said church and local officials revived the grand fluvial procession and the building of a traditional pagoda after considering safety measures to protect devotees.

It began with fireworks

“Even the families of the surviving victims have been clamoring for the return of the traditional grand, yet meaningful, pagoda celebration during the Feast of the Krus sa Wawa,” Suatengco said.

About 500 people, many of them children, were jammed on the pagoda when it suddenly tilted after some devotees on board lit fireworks, according to Inquirer accounts of the disaster.

The fireworks had caused devotees to rush to one side of the pagoda to watch the display of lights. The rush caused the pagoda to tilt and take in water.

Soon, the merrymakers began to drown.

The fluvial parade had been a part of Bocaue’s fiesta celebrations for years, a legacy brought down to the Roman Catholic country by Spanish colonizers centuries ago.

During such parades, it is said, devotees pray for solutions to their problems, including cures for their illnesses.

Many of those who perished in that tragedy were children, who drowned.

“The procession went on without any problem. I think this will revive the yearly celebrations featuring our traditional pagoda carrying the Holy Cross of Wawa,” De la Cruz said.

It was alternately sunny and overcast when the pagoda, accompanied by smaller boats with devotees, sailed for five hours along the river, starting at 11 a.m.

The parade followed a nine-day novena, which ended on Saturday night, when Bocaue’s sky glowed with fireworks, the town’s main product.

A parade, featuring marching bands and representatives of local business establishments, was held around the town earlier on Saturday.

Older residents said the devotion to the Krus sa Wawa started in the 1800s when residents found a wooden cross in the river amid a strong current whipped by a typhoon.

They said the cross came from the town’s old church that had been gutted by fire. It has since been kept in a church in Barangay (village) Bambang.

“While this pagoda is durable because we used high-quality steel bars and wood, what makes it special is the prayers and longing of the people of Bocaue to end the fear arising from the tragedy,” San Juan said. “They are hoping that Bocaue will rise from the tragedy and grief.”

After the tragedy in 1993, residents continued to celebrate the feast but only small boats were allowed to sail the river.

“Today, we made sure that the people who guided the pagoda were locals who knew the river well,” De la Cruz said.–With a report from Inquirer Research